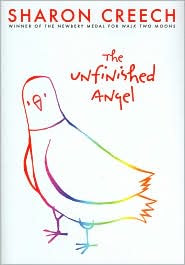 Peoples are strange!
The things they are doing and saying--sometimes they make no sense. Did their brains fall out of their heads? And why so much saying, so much talking all the time day and night, all those words spilling out of those mouths? Why so much? Why don't they be quiet?

This is a strange but strangely lovely little book. Very quirky. Not for everyone. But for some readers, this may be a delightful little read. It's narrated by an angel, an angel who feels a little 'unfinished' at times. He (or she for that matter, I don't know that it ever says one way or the other...at least not that I can recall) has been living in a stone tower of the Casa Rosa, a tiny village in the Swiss Alps for centuries. This angel has watched over the villagers for hundreds and hundreds of years. Sometimes choosing to get involved, and sometimes not so much. This book takes place at a time when the angel is choosing to become involved--mainly because of a lovely but lonely little girl named Zola.

Me, I am an angel. I am supposed to be having all the words in all the languages, but I am not. Many are missing. I am also not having a special assignment. I think I did not get all the training. (2)

You won't believe this, but there are peoples who pay money to other peoples to wash their hairs and even to paint colors on their toes. Is really! And in the same world of peoples there are other peoples who have to crawl in the dirt scrounging for a measly piece of garbage to eat. I am not fabbagrating. Don't get me started.
At night I swish in the heads of the peoples with the clean hairs and feets, showing them the peoples crawling in the dirt, but in the morning when the clean peoples wake up they have already forgotten. I think maybe it is my fault that they forget so quick and so it is my fault that there are peoples who have to crawl in the dirt. I am not knowing enough. What are the other angels doing? (26-27)

I am a little crankiful when I am not sleeping well. (60)

As I said, this one might not appeal to every reader. But I think it is delightful in its own little way. I thought it was an interesting book with a unique narrative voice. The word choice and style may be a little off-putting for some readers, but it may work well with others. I know that I'll probably be borrowing words like crankiful. I only wish I'd thought to make a list of all the words I liked. Some were really quite clever.

© Becky Laney of Young Readers
Posted by Becky at 9:14 AM