Neil Armstrong is My Uncle 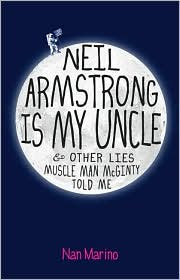 Muscle Man McGinty is a squirrelly runt, a lying snake, and a pitiful excuse for a ten-year-old. The problem is no one on Ramble Street knows it but me. In the entire town of Massapequa Park, only I see him for what he really is. A phony.

Tamara Ann Simpson, our narrator, can't stand Muscle Man McGinty. Not even a little bit. It drives her crazy that the other kids in the neighborhood are so nice, so friendly, so trusting. Who is Muscle Man? Well, he's a foster kid, for one thing. A new kid for another. But why should that really matter to Tamara? Well, her best friend--also a foster kid--has just moved, has just reunited with her mother. And Muscle Man has taken her place in the foster home.

Set in the summer of 1969, it's a character-driven coming-of-age story. Of lazy and not-so-lazy summer days filled with kickball, friends, and ice cream. It's a story about friendship, in a way, but it's more about capturing a time than anything else. (There's some talk of Vietnam, some talk of the astronauts landing on the moon, etc.)

Is it my most favorite children's book set during that time? Probably not. I really really love Shooting the Moon. But it's a good book.

© Becky Laney of Young Readers
Posted by Becky at 5:28 PM