Take the Mummy and Run 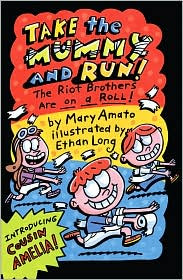 Amato, Mary. 2009. Take the Mummy and Run: The Riot Brothers Are On A Roll. Illustrations by Ethan Long. Holiday House. 226 pages.

First, you should know this is three books in one.

Each adventure is six or seven chapters long. Very reader-friendly. And despite it's overall length, not that intimidating once you get a look at what's inside.

Our narrator is Wilbur Riot. Wilbur and his brother Orville are soon joined by their second cousin, Amelia E. Hart. Because she's a girl, the boys question whether or not she can be one of them, one of "the Riot Brothers." Does a girl know what's funny? Can she take a joke? Can she play a good joke? Cousin Amelia doesn't disappoint Wilbur and Orville, and I doubt she'll disappoint readers.

Did I like this one? Surprisingly yes. Let me qualify that. I had really, really low expectations for this one. I didn't expect to like it at all. I mean it just looked so immature, so silly, so not what a grown-up should be spending their time reading. Well, unless they're reading it out loud to their kids. Was it silly? Yes. But I'm glad that there are books out there like this one. (This is the fourth in the series, by the way.) Because I think this book does have a certain amount of kid-appeal. And I think series books like this could hook a reader early. And that is a good thing.

This is a book about kids for kids.

© Becky Laney of Young Readers
Posted by Becky at 10:57 AM