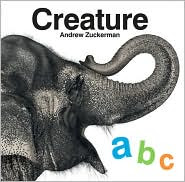 How does this one work? Well, there's a two page spread featuring the letter itself--upper and lower case. This page also features a sneak-peek of the animal. (I love what he did with A, by the way!) And then there's another two page spread naming an animal (or in some cases many animals) that represents that letter. (As you might have guessed, Ee is for Elephant.) The book also features a glossary of facts for each animal represented in the book.

© Becky Laney of Young Readers
Posted by Becky at 9:03 AM