49. Disney All Aboard! Mickey's Railway 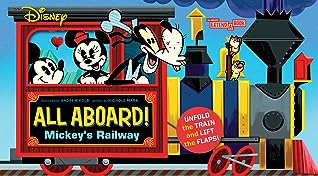 First sentence: Hiya pal! It's me, Mickey Mouse. My friends and I are hopping aboard the railroad for a trip to the countryside. Full steam ahead!

Premise/plot: Disney All Aboard is an activity book for preschoolers. The pages aren't as thick as a traditional board book for the very young (the age/stage where everything is chewed on). The pages unfold/fold. There are peep-holes and flaps. It is very much designed to be interactive. The text asks questions for little ones to answer. Questions like "How many red foods are on the table?"

The book can be a bit unwieldy (a lot unwieldy) so it's best read perhaps sitting on the floor with your little one. I think the traditional lap would be a bit too much. Once the book is unfolded it's a LOT.

My thoughts: I enjoyed the pictures and the simple text. I don't have little ones in this age group anymore. But I do love a little Disney now and then.

If your little one loves Disney AND loves trains AND loves more interactive seek and find books, then this one may be worth exploring. 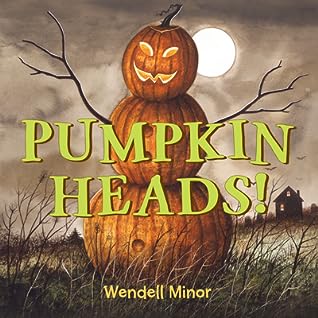 First sentence: October is here. It's time to pick a pumpkin!

Premise/plot: Pumpkin Heads is a picture book celebrating the carving of pumpkins for Halloween.

I don't personally celebrate Halloween and I've never carved--or decorated--a pumpkin. But these illustrations are so wonderful.

I would recommend this one for those who *do* celebrate Halloween and do actually select pumpkins to carve.

The publisher, Charlesbridge, says it releases August 2021. But GoodReads has an earlier publishing date of 2000! My guess is this one is being reprinted. 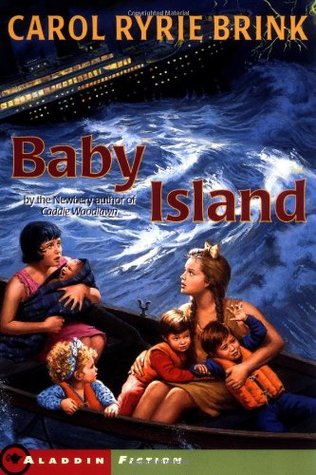 First sentence: On the night of September twentieth, the S.S. Ormina, two weeks outward bound from San Francisco to Australia, was struck by a tropical storm and badly disabled.

Premise/plot: Mary Wallace (age 12) and her sister Jean (age 10) have a grand old time when they find themselves shipwrecked on an island in charge of four children under the age of two. Think about that for a minute--if you're an adult.

So as the ship is sinking, Mary decides to help rescue the babies she knows are on board. Apparently three of the four babies weren't with their parent(s) at the time. The two sisters end up with four babies (three of which are siblings): Elisha and Elijah (age 20 months) and Jonah (age 4 months) AND a little girl Ann Elizabeth (age 1). So these children end up in a lifeboat together--no other women (as you'd expect in a sinking ship). They are set adrift in the ocean. But don't worry, all will be well because we've got baby whisperers on board. Mary knows everything there is to know about babies. And she's willing to learn about lifeboats and islands, too, I suppose.

Eventually, the lifeboat comes to shore on a desert island. The kids persevere for a bit...having one grand adventure after another. Will rescue come?

My thoughts: My mom LOVED this book when she was in elementary school. She's always talking about how much she'd love to reread this book and how she hasn't seen a copy in years. So it was a Christmas gift to her this year. And after she reread it, I decided to read it for the first time. She has warm and fuzzy memories about it. I do not have such--for better or worse.

It's not that the book is bad--or "bad"--so much as the book is ridiculously naive and requires a long suspension of disbelief. So long as you don't think about what it would actually be like to be shipwrecked with babies on a desert island, you might enjoy yourself mightily. But this book doesn't really accurately cover the things babies are known for most.

Is this because it wasn't polite to talk about dirty diapers in general in 1937? Or it wasn't appropriate for children to read about dirty diapers? But it wasn't just that these babies never made messes in their clothes/diapers. It was that they didn't really behave and act like babies at all. I mean taking care of young babies is HARD--as in exhausting, physically, mentally, emotionally demanding. Not that it isn't rewarding and worth it. Not that it can't be full of sweet, tender, lovely moments. But for all the sweetness and joy--there's a lot of clean up and work.

But forgiving that--and I can forgive that--it also doesn't feel realistic in terms of island survival either. Like this island has no insects or wild life that pose any dangers or risks whatsoever. Not that I wanted there to be poisonous, venomous creatures about--just the idea that this island was 100% baby-proofed and that it was so safe and so easy. (Also no one ever gets sunburned.) It's like super-easy to keep all four babies (and themselves) adequately nourished. It just doesn't feel realistic or likely. 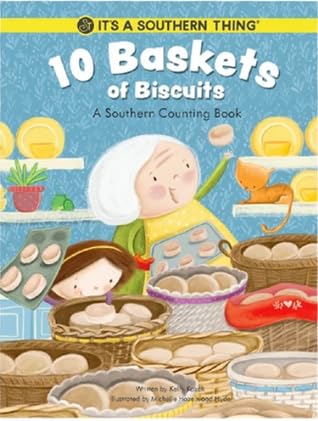 First sentence: The night before visiting Grandma Charley couldn't close her eyes. She was just too excited and full of butterflies.

Premise/plot: Charley is so very excited to be visiting her Grandma that she can't sleep. Her mom suggests that instead of counting sheep (to fall asleep) she should count the things she'll see at Grandma's house. Thus the counting begins:

My thoughts: I really LOVED this one. I discovered it on YouTube. It appears to be the whole book. I could be wrong. But we do get all ten numbers. I'm confident that even if it wasn't the whole book exactly, my thoughts are so strong--LOVE, LOVE, LOVE--that I think any missing content wouldn't change my mind.

I love books that highlight the super-special-strong bond between grandparents and grandchildren. I love the imagery in this one. We get quite an idea of what this Grandma is all about! And the book is highlighting Southern grandmas. I love the narrative. Books written in rhyme don't always work well for me. I can be a bit harsh and judgmental if they don't. A rhyming book needs to really be a great read aloud. It needs to feel natural--not forced--and authentic--not fake. This one excels!

It was a sweet read. It captures dozens of joyful moments. And to be fair, the smell of gluten does resemble the feeling of love.

45. A Home for Peanut Butter and Jelly 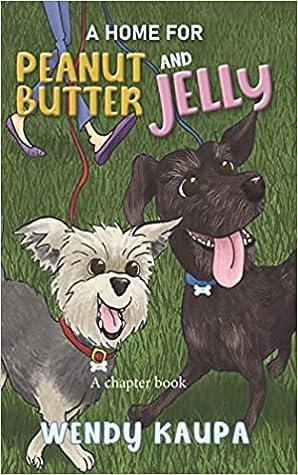 First sentence: “Mommm, I’m so borrred!” I whine. “Did you do your chores?” my mother asks, her eyes barely leaving the laptop screen. Honestly, I should have known better than to bother her during “blogging” time. My mother started a blog three months ago about cooking for a picky family, called “The Finicky Family!”

Premise/plot: Mia's mother volunteers her to be a volunteer at a local animal shelter during the summer. While volunteering, she falls in love with two small dogs: Peanut Butter and Jelly. Can she convince her parents that she *needs* to adopt them? How will the family adjust to their new family members?

My thoughts: We're told that Mia is about to enter ninth grade. Sadly, Mia has the emotional maturity of someone entering second or third grade. Mia was reading so young to me that I was absolutely shocked to learn she's about to enter high school! Now does she stay a baby? Not really. Getting the two dogs matures her--I imagine a montage scene with a peppy song--magically and makes her a kind, considerate, non-bratty human being.

A Home for Peanut Butter and Jelly is pure wish fulfillment. There's nothing wrong with a little wish fulfillment now and then. And I think it may be a stage that readers go through when they're young. It makes sense as an early chapter book for the seven to nine crowd. (But why is Mia aged the way she is???) It does not make any sense for a middle grade novel (for readers aged ten and up).

A Home for Peanut Butter and Jelly would be safe to hand to readers who are reluctant to pick up books with dogs on the cover. NO DOGS DIE in the book. 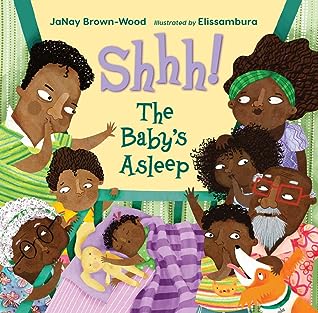 Premise/plot: It may take a WHOLE family working together to keep the house quiet enough for the baby to sleep--and stay asleep!!! After half a dozen close-calls, will the baby finally wake up?!?!

I will say this--for what it's worth--babies should sleep with some white noise so that the family doesn't have to be so careful! 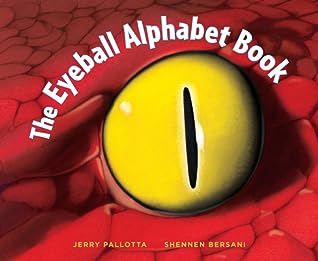 First sentence: A is for Alligator. An alligator has eyes that stick up on the top of its head. It can look above the water while the rest of its head and body are hidden below the water.

Premise/plot: The Eyeball Alphabet book is a nonfiction picture book. It is an alphabet book, true, but not just any old ordinary alphabet book. It is an EYEBALL alphabet book. Each letter of the alphabet highlights the eyes of an animal. Animal facts, eye facts, and idioms galore. (Each spread features an eye-related idiom. An idiom is an expression that means something different from what it actually says. For example, "keep your eye on the ball," "in the blink of an eye," etc.)

My thought: I liked this one more than I thought I would. This is neither a cute, warm, and fuzzy animal book nor a strange, exotic, creepy animal book. It covers a wide range of animals. It has facts. Some facts are focused on the specific animal. But occasionally the focus is just on eye facts in general and has very little to do with the animal in question.

I found it an interesting read. I think it would be a good fit with school and classroom libraries in particular.