I realize I've been a neglectful host lately. Since I finished up the challenge a few months ago, I haven't been remembering to put up posts each month asking how others are coming along. I can't *promise* I'll be better. But I'll try. You can post all updates here.

Boyett-Brinkley has finished the challenge:

Honestly, I don't know how much babies and toddlers need to know about Knut the polar bear. Not to be mean at all, but I don't know why they would other than it's just cute and fun to see pictures of baby polar bears at any age. But for those parents that can't get enough about Knut, this newest edition is for the youngest admirers of the bunch.

Simple text, actual photographs. The way it should be. I tend to be the sort that dislikes when nonfiction books about animals feature cartoon illustrations instead of the real thing. I love photographs. There are exceptions to the rules--Steve Jenkin's Dogs and Cats for example.

I don't know if this book is necessary or a "must read" by any means. But it is fun and cute and harmless.

I love polar bears. I do. Klondike and Snow won my heart years ago during their documentary. And I haven't been able to look at polar bears the same way ever since. My mom insists that I do not need a polar bear for a pet--even if it is a baby polar bear. This is the same mom that never would let me have a dog or a cat and put up some resistance about the two hamsters I did have growing up. So it wasn't a shock that she wouldn't cave for the polar bear or the elephant either.

Mommy Do You Love Me? 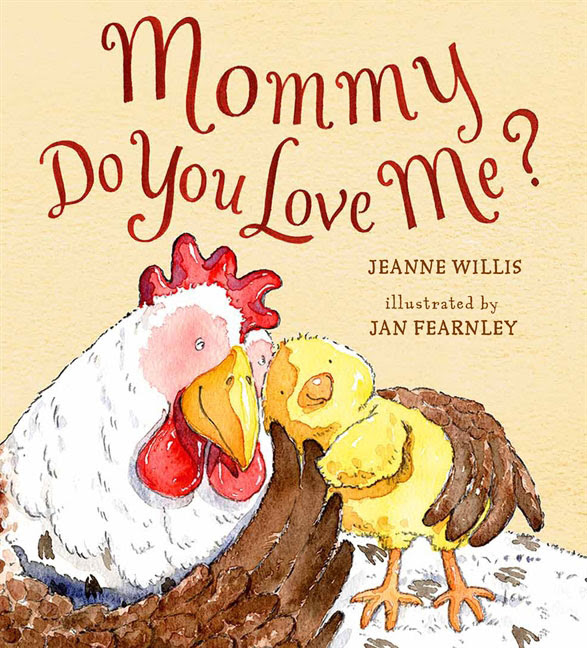 Willis, Jeanne. 2008. Mommy Do You Love Me? Illustrated by Jan Fearnley.

Mommy Do You Love Me is a sweet and charming picture book about a hen and her baby chick. Unconditional love. Little Chick wants to know if his mother will always always always love him no matter what. Of course the answer is predictable--yes, of course he's still loved--but sweet. Here is what the jacket says,

"Mommy, do you love me?" asks Chick.
"I love you more than words can ever say," the hen replies. And she gives him a kiss on the cheek.
Even when Chick makes funny faces, splashes in the mud, and comes in last place, his mommy still loves him. But does she love him when he cheeps and chirps and shouts very, very loudly? Does she still love him when he misbehaves?

It's a cute book for parents to share with their children. It does have a universal message. But it's also a fun message. The illustrations are so delightful, so playful, so right that it just works really well. They're able to capture the spirit of the text. So this is one I'm happy to recommend. 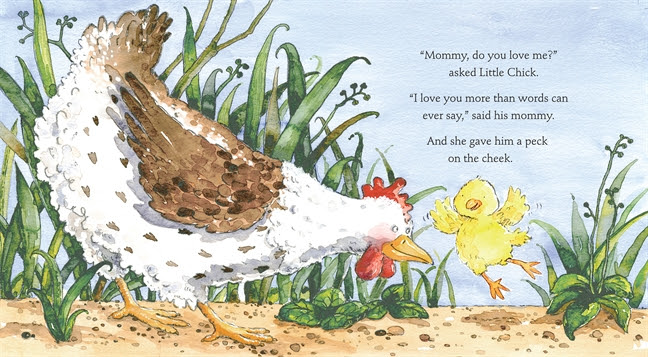 I'm going to do something slightly unusual. I'm going to give separate ratings to the components of this one book. It is of varying quality, in my opinion, but I'm not a kid so take my opinion with a grain of salt. The illustrations I'd rate somewhere between a three or three and 1/2. They're enjoyable. Somewhere in the average to slightly better than average range. The pop-ups--for this is indeed a pop-up book--I'd rate a four easily. They were very elaborate. Each spread growing more and more so. So while it doesn't start out as being very complex, very interesting, by the end you're like whoa a lot of work went into this. But the text, the poor text, is a text-book example of rhymes that aren't rhythmic. The text rhymes. But it is not rhythmic. (To borrow from Lucy, the text rolls right off your tongue and onto the floor.) It just falls flat or falls short of what I'd expect of a book of this quality. The visual effects--the pop ups, the illustrations--are good, but the text is just okay. So I'd have to rate the text in the two to two and half range. The story itself is good. Pirates are forced into their lifeboat when their boat sinks (or explodes or whatever) but then their lifeboat springs a leak. And there is a shark nearby waiting to get them...or so they think. The book suffers from trying to hard to be the Green Grass Grew All Aroundish. In other words, it's one of those that repeats itself--like The House That Jack Built, like Green Eggs and Ham, etc. But since the text lacks all rhythm, it just doesn't work. Or it works, but just barely. This is how their publisher describes the book, "The Castaway Pirates -- In this pop-up pirate adventure, five pirates try to avoid being eaten by a shark when their ship springs a leak. They try to plug the hole with everything from the captain's coat to his rope, but in the end it's their smelly feet that turn the shark away. Each spread features a colorful, intricate pop-up designed by a master paper engineer, and the pop-ups grow more elaborate with each turn of the page."

Beatrice Doesn't Want To (2004) is now available in paperback! This is exciting news for me because I love this lovable brother-sister dog duo. Henry has a little sister named Beatrice. As you can guess from the title, Beatrice doesn't want to do something she has to do. In this case, Henry needs her to go with him to the library so he can work on a project for school. She's stubborn; she's insistent. She doesn't want to go to the library. She doesn't like books. She doesn't like reading. The library is B-O-R-I-N-G. Which means that Henry at the beginning is in for some trouble--whining, pesky little sister! But on the third day, the final day, Beatrice changes her tune! It's story time at the library...and you're invited!
Posted by Becky at 1:49 PM No comments: