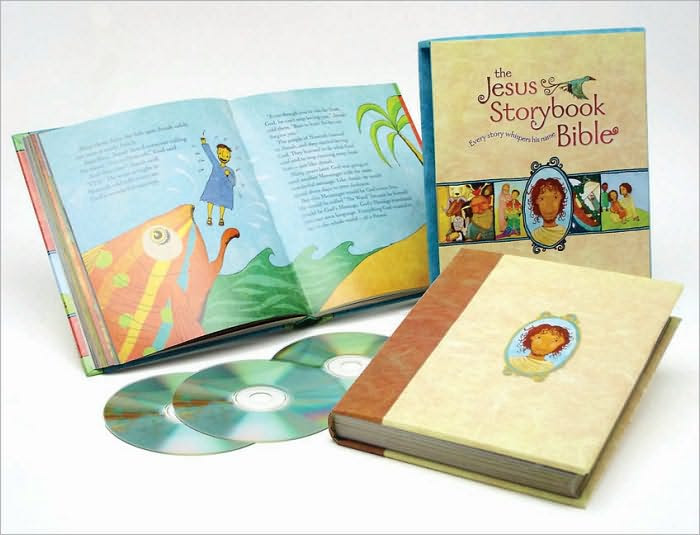 God wrote, "I love you" -- he wrote it in the sky, and on the earth, and under the sea. He wrote his message everywhere! Because God created everything in his world to reflect him like a mirror -- to show us what he is like, to help us to know him, to make our hearts sing.
The way a kitten chases her tail. The way red poppies grow wild. The way a dolphin swims.

And God put it into words, too, and wrote it in a book called "the Bible."
Now some people think the Bible is a book of rules, telling you what you should and shouldn't do. The Bible certainly does have some rules in it. They show you how life works best. But the Bible isn't mainly about you and what you should be doing. It's about God and what he has done.

It had me at hello from the very first story or chapter--appropriately titled The Story and The Song--in which readers get introduced to God, to the Bible, to the Gospel.

The Bible is most of all a Story. It's an adventure story about a young Hero who comes from a far country to win back his lost treasure. It's a love story about a brave Prince who leaves his palace, his throne -- everything -- to rescue the one he loves. It's like the most wonderful of fairy tales that has come true in real life!

You see, the best thing about this Story is -- it's true. There are lots of stories in the Bible, but all the stories are telling one Big Story. The Story of how God loves his children and comes to rescue them.
It takes the whole Bible to tell this Story. And at the center of the Story, there is a baby. Every Story in the Bible whispers his name. He is like the missing piece in a puzzle -- the piece that makes all the other pieces fit together, and suddenly you can see a beautiful picture.
And this is no ordinary baby. This is the Child upon whom everything would depend. This is the Child who would one day -- but wait. Our story starts where all good stories start. Right at the very beginning... 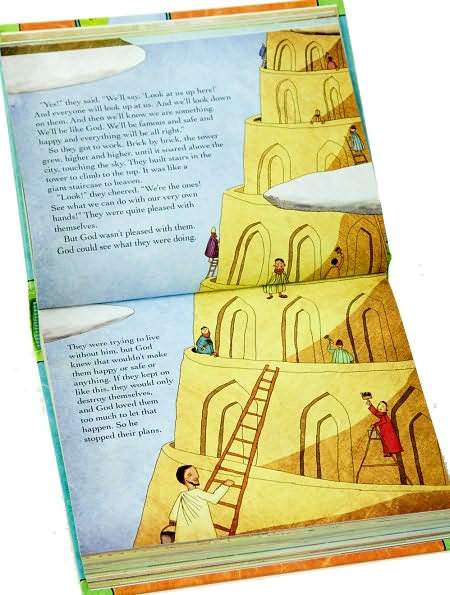 I honestly didn't know what to expect from this one. I've seen other Bible story books. I've read other Bible story books. Some I remember from my childhood. Others I've come across as an adult. So what makes this one special? I think what makes this one work--really work--is how Sally Lloyd-Jones has every story whisper His name. Her ability to connect each story with the Big Story, keeps everything in perspective, keeps everything connected and relevant. It also helps that she's a good storyteller! She has a definite way with words! She keeps the stories on a child's level, but yet, the stories are beautifully and compellingly told.
From "God to the Rescue!"

God's people would always remember this great rescue and call it "Passover." But an even Greater Rescue was coming.
Many years later, God was going to do it again. He was going to come down once more to rescue his people. But this time God was going to set them free forever and ever. (91)

God had a job for Jonah. But Jonah didn't want it.
"Go to Nineveh," God said, "And tell your worst enemies that I love them."
"No!" said Jonah. "Those are bad people doing bad things!"
"Exactly," said God. "They have run far away from me. But I can't stop loving them. I will give them a new start. I will forgive them."
"NO!" said Jonah. "They don't deserve it!" (160)

Many years later, God was going to send another Messenger with the same wonderful message. Like Jonah, he would spend three days in utter darkness. 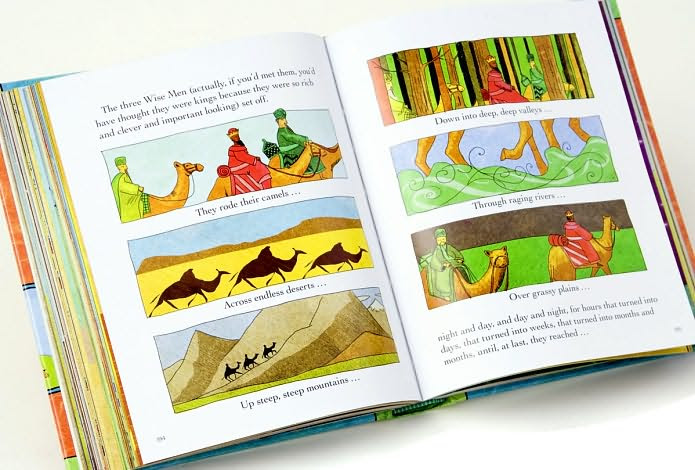 I could almost pick out a passage to highlight from each and every story because the book is really just that good.
One of my favorite, favorite stories is "Operation 'No More Tears!'" which draws from Isaiah 9, 11, 40, 50, 53, 55, and 60.
Isaiah has always, always been a favorite book of mine. And to see it so wonderfully, so artistically translated into a story that little ones can understand, well, it does my heart good! The story may be concise, but it's faithful to the spirit of the message. 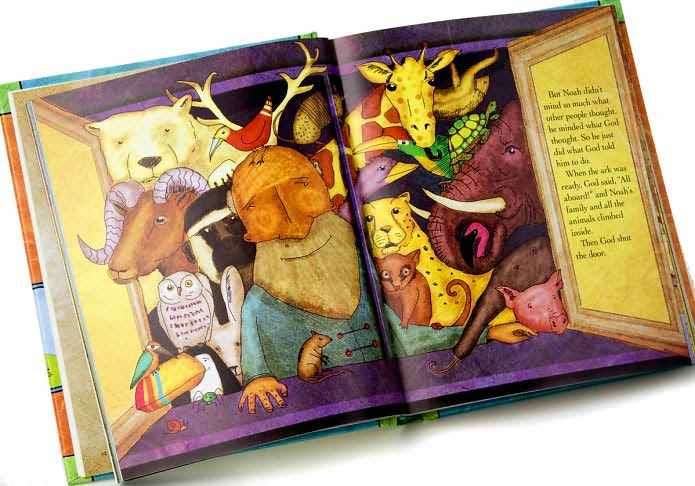 There are twenty-one stories from the Old Testament. And twenty-three stories from the New Testament.
The illustrations are by Jago. I really liked the illustrations. I wasn't sure about them at first. But as I read the book, I began to like them more and more.
This one is available in two editions. One is the deluxe edition. And the other is the regular (no-bells-or-whistles) edition. What does the deluxe edition offer that makes it worth the price difference? It offers the book as an audio book. Three CDs narrated by David Suchet. You'll have to decide for yourself if the audio book would be a great asset to your family's library. (Personally, I like the audio book. And I would recommend it.) But either book would be a good choice.
(Both the illustrator and the narrator are from England.)
© 2011 Becky Laney of Young Readers
Posted by Becky at 4:24 PM No comments: