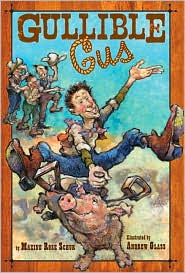 I'm allergic to westerns. But I really thought that this mild exposure wouldn't cause an allergic reaction. After all, it's more humor (and tall tale) than western in content. See for yourself:

Cowboy Gus believed everything people told him. Everything! The other cowboys at the ranch fed him the biggest lies, and he swallowed them whole.
"Watch out, Gus!" Billy Bones once hollered. "It's going to rain nails!" And before he could add "Just Kidding," Gus ran to the barn and stuck a bucket on his head. Another time, Judd Mudd told Gus, "Tonight the hens will sing lullabies," and Gus slept in the chicken coop so he wouldn't miss the music.

The local doc soon confirms that Gus is the most gullible man in the whole state of Texas. He sends him to Fibrock and gives him a mission: find the biggest liar and listen to his most outlandish, most foolish claim. If he can just once utter the phrase, "I don't believe it" then he may just find himself cured. This chapter book features several wild tales all meant to test Gus' gullibility. "Dr. Ducknoise and His Movin' On Medicine Show" , "Cantankerous Clem" and "The Tale of Backwards Hannah."

Will Gus end up cured? Or will he be gullible to the very end?

So did I like it? Not really. Maybe it's the illustrations. Maybe it's the stories and the Texas stereotypes. I don't know. But just because I didn't like this one doesn't mean you won't.

© Becky Laney of Young Readers
Posted by Becky at 10:18 AM