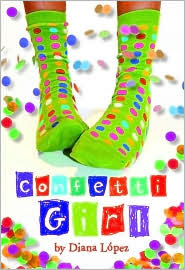 Some people collect coins or stamps, but I collect socks. I have a dresser with drawers labeled daily socks, lonely socks, holey socks, and sock heaven.
The daily drawer helps me get dressed every morning. When I'm bored, I reorganize it. I group the socks by color. Then I group them by style -- dressy, casual, or athletic. Then by length -- ankle, crew, or knee-high.

What did I love about this one? Just about everything! Our narrator is Apolonia "Lina" Flores. She's got a book-loving, English-teaching father whom she's on shaky terms with. (Though if you asked him, he might say things are just fine, thank you very much.) She feels her father doesn't have a clue. A clue as to who she is, what she likes, and what she doesn't like. For example, he thinks she loves reading--loves English class--as much as he does. But she doesn't. Not at all. She loves science class. (So much so that she dresses up for Halloween as a red tide.) What else is going on in her life? Well, there's her best friend, Vanessa, and her best friend's mother (Ms. Cantu) who has taken her under her wing since her own mother's death. (Vanessa's mom has a few issues of her own.) And then there's Luis. Oh my! Such a cute little guy to have a crush on.

This book was so well done. Seriously. The characters--all of them--were so well developed, so fleshed out. From our narrator Lina, to her father, to Vanessa, to Vanessa's mom, to Luis. I even got a good sense as to who Lina's mom was. So I just have to say that that was great. It's not often that all the characters are so human, so genuine, so believable.

I'd not heard of most of these dichos before--proverbs--but I thought they were a really nice touch. If I had to pick a favorite, it would probably be Cada cabeza es un mundo -- Inside each head lies a different world. I enjoyed getting "inside" these characters, and seeing a different world. You might too.

© Becky Laney of Young Readers
Posted by Becky at 1:14 PM