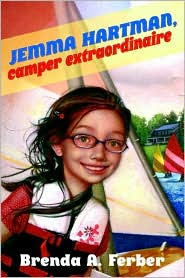 Tammy said we'd be best friends forever, and I believed her. I was standing on her driveway, squinting in the August sun. The moving truck had left, and Tammy's parents and older brother were already in their minivan. Tammy and I did our secret handshake, complete with butt bump and shimmy. We hugged and promised to call. Then Tammy climbed into the van, and they drove away. The Eriksons were moving to Chicago, only thirty minutes away by car from our life here in Deerfield. But when you were about to start fifth grade, anything further than a bike ride was another world.

It's almost been a year since Jemma said good-bye to her best friend, Tammy. Now the two are getting ready to go to summer camp together. And everything will be perfect again, right? Two girls, two best friends, everything falling exactly into place, right? After all, how much can a girl change between fourth grade and sixth grade? Yes, these two sixth-graders-to-be are getting ready to reunite...but is Jemma ready for the new Tammy?

Six young girls in a cabin together for four weeks. What can go wrong?!

Jemma's summer may not be going according to the way she had planned it. But can Jemma learn to deal with life, to make the best of every circumstance?

I really liked this one. Jemma is not a perfect heroine. She makes mistakes now and then. But she's a heartfelt girl. And I could feel her pain and confusion. I understood her jealousies and insecurities. I felt like I could completely relate to her as a character. And I thought the other characters: Annie and Kat, Delaney, Brooke, and Tammy were all well-done too. Perhaps not as fleshed out as the heroine herself. But certainly more than two-dimensional.

© Becky Laney of Young Readers
Posted by Becky at 8:38 AM