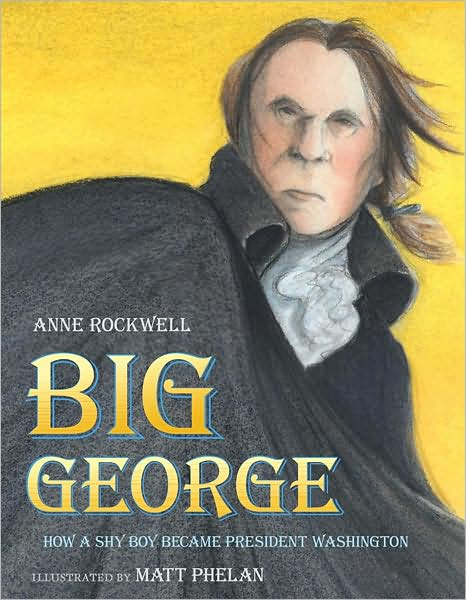 Three hundred years ago, there was no United States of America. Instead, there were thirteen English colonies in North America. In the one called Virginia, a tall boy loved to get on his horse and gallop through the woods alone. He wasn't afraid of bears, or wolves, or the native hunters with bows and arrows who shared those woods. George Washington wasn't afraid of anything, except making conversation. He was shy.

A picture book biography of George Washington. An obvious resource for classrooms and libraries. This one is written by Anne Rockwell and illustrated by Matt Phelan. I thought the text was nice. It's definitely informative. There is much to the story of a man, one of the most famous men in history I'd imagine, but it is not an overwhelming portrait either. We see him grow from a boy to a man within these pages.

The accompanying illustrations by Phelan are nice as well. I wouldn't say I'm the biggest fan of Phelan's illustrations. But these do work well with the story, the subject.

© Becky Laney of Young Readers
Posted by Becky at 7:37 AM