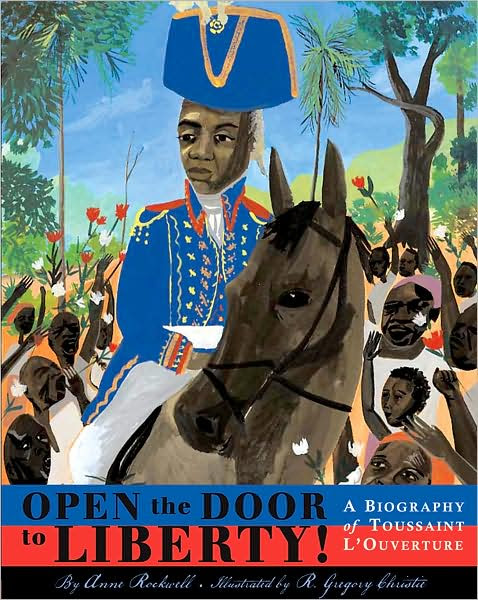 In about 1743 a skinny, puny baby boy was born on the island of St. Domingue in the Caribbean Sea. Both his parents were slaves who'd been born in West Africa. Before their baby was born they had consulted a wise woman, an African-born slave who knew how to communicate with the powerful spirit world. She predicted that their son would be very special. She said he would grow up to be more than a man. He would be a nation.

Are you familiar with Toussaint L'Ouverture? The preface says "we don't hear much about him today, but what he did changed his world and ours." That has certainly been true of my experience, of course, that could be my education (or lack thereof.) I have a feeling the history textbooks that were used by the school I attended left out plenty of important people, significant people.

What we have is a biography written for mid-to-upper elementary-aged readers. I found it reader-friendly. (Illustrations are just one of the ways to make biographies reader-friendly. And these by R. Gregory Christie are very nice.) I found it informative and well-written. I found the story to be fascinating actually.

© Becky Laney of Young Readers
Posted by Becky at 9:17 AM