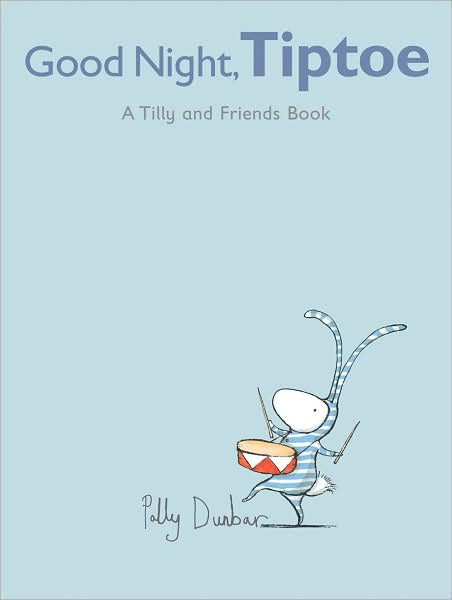 Hector yawned. Tilly yawned. Everybody yawned! Everybody except Tiptoe.

Doodle Bites and Good Night, Tiptoe conclude the six book series, Tilly and Friends. The series is by Polly Dunbar. And it's easily become one of my favorites since I discovered them last year. (You can read my reviews of the first four: Hello Tilly, Happy Hector, Where's Tumpty and Pretty Pru. I reviewed Doodle Bites just yesterday.) Tilly, our young heroine, lives with her five friends (all animals, by the way) in her yellow house. Each adventure has focused on one of the characters, one of the friends. And yes, while they are a series, and they all complement one another well, you can read them in any order.

In Good Night, Tiptoe, it's bedtime. Everyone but Tiptoe seems to get this. That the time has come to go to bed, to go to sleep. But Tiptoe doesn't want to go to bed. He's just not sleepy. As Tilly tries her best to put him to sleep, to get all of her friends ready for bed, she realizes that Tiptoe might have the right idea after all!

These books are so fun, so playful, so delightful, so charming, so sweet, so right. I have just love, love, loved reading them all. Tilly and her friends have become my friends. I think the characters have been done so well, so authentically. I definitely recommend the whole series!

© Becky Laney of Young Readers
Posted by Becky at 8:50 AM