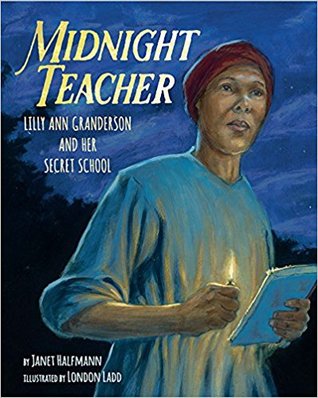 First sentence: From a young age, Lilly Ann Eliza Cox believed the path to freedom was through education. Born into slavery around 1821 in Petersburg, Virginia, Lilly Ann was the youngest of four sisters. When she was around four years old, her mother died, and Lilly Ann was sold to a family in Kentucky.

Premise/plot: Lilly Ann learned to read and write as a child in Kentucky even though she was a slave, even though educating slaves wasn't the norm. (In some slave states it was actually illegal; in other slave states there wasn't a law against it, but it was probably more the exception than the rule.) She wanted to share her knowledge with other slaves. She began holding secret schools on Sundays. After her master's death, Lilly Ann was sold; her new masters were in Mississippi. It was illegal for slaves to learn to read and write there. Would that stop Lilly Ann from teaching those who wanted to be taught?! NO! It did mean that she'd have to hold school at night and in secret--hence the title of this picture book biography, MIDNIGHT TEACHER. The story of her life is worth your attention.

My thoughts: I really LOVED this one. It is a picture book for older readers, in my opinion, because it has a lot of text. (It could also be a great read aloud for elementary students.) Education is something that we often take for granted; it is something that we don't take time to fully appreciate. This picture book is an engaging read that got me thinking. It celebrates the legacy of a strong woman.