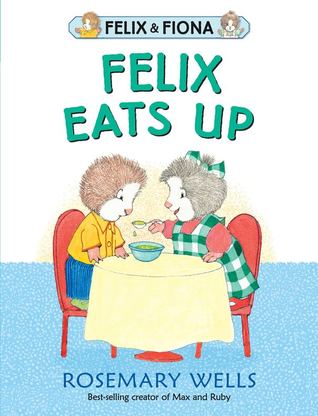 First sentence: Felix brought the same sandwich to school every day. He had no need to try anything new. He was happy with just his sprouts on buttered oat bread.

Premise/plot: Felix will be spending the night at Fiona's house. That would be good news--great news--if they were staying home for dinner. Fiona's mom makes macaroni and cheese. Felix is okay with macaroni and cheese. But they are going out to dinner. And he has no say in where they go. Felix will most likely have to go somewhere he does not want to go. Felix will most likely have to try something new--or go hungry. Will he survive the night?!

My thoughts: I have mixed thoughts on Felix Eats Up. On the one hand, Felix is much braver--in general--than I was/am. Felix does NOT think of an excuse to postpone the sleepover. Felix does NOT let his fear or worry change his plans. If Felix had known about eating out BEFORE saying yes to the sleepover, would he have suggested a different night? We'll never know. Fiona is kind and compassionate. But firm. She's not such a people-pleaser that she'll let Felix's picky eating influence where she celebrates her half-birthday. Felix needs to be taken care of--nurtured--and Fiona steps up to do just that. She'll coax him steadily through every single "scary" experience.

On the other hand, how realistic is it that Felix would actually LIKE and FIND DELICIOUS every single one of the twelve new foods he tries?!?! I could easily see a person liking some of what they try new. Also there is a difference between liking enough to eat just the one time and actually like-liking enough to order it again.

And another thing, the writing seemed a bit off/weird. "All of a sudden, Fiona's mama called the Dragon's Belly. She made a reservation for four." Also, how do you get birthday candles in a fortune cookie? Also, who really celebrates half-birthdays with half-birthday songs and blowing out of candles?