Puppies and Piggies had me at hello. It's a fun, playful, rhythmic book featuring a variety of farm animals. This is how it begins:

Another one of my favorites is about a goose:

The illustrations are nice. (Watercolor by the way) They offer plenty of details, but not in an overwhelming way. The reader can choose, however, to seek out and discover the little things that add to the story as a whole. (For example, on the opening spread, all the animals that play a role in the book can be seen though the natural focus is on the puppy. There is the mouse hiding near the chicken feed, the goose hiding in the wheel barrow, the bunny and pig resting by the picket fence, the pony and cat beside the corner of the house, the hen and baby chicks playing in the puddle, etc.) It is interesting to see which animals appear on which pages. 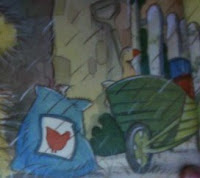 Rhythm and rhymes are elements that can play an important role in books for young children. Especially if they're done right. It's not easy as you might think to get it right. It has to feel natural. It has to be natural.