10. The Bad Guys: The Baddest Day Ever 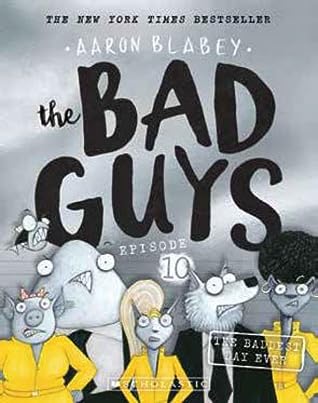 Premise/plot: Question: Should readers be able to pick up any book in a series and make at least some sense of it. Should they be able to grasp at who the main characters are, how they relate to each other, and what the general plot of this specific book is?! This book is the tenth in the series. I couldn’t tell you anything about the characters—though my guess is that it is a team of somethings (could not for the life of me tell you what animal/creature any is supposed to be). Nor could I tell you anything about the plot with the exception that a character named Snake is dead and then not dead?!

My thoughts: Answer: I think good writers make an effort with each series book to help readers out. Even a little effort is a good thing. Because the truth is readers don’t always read books in a series in order. Even if they’ve read book one in a series, they may pick up book seven or eight next. It might be a case of what books are on the library shelf—either school or public. The more popular a series, the greater the chance that the books won’t be able to be checked out in order. Even if readers have read most if not all the books in the series, time might have elapsed between books. If it has been months even a year since reading the last book, readers can start a series a bit fuzzy with only a vague recall of what happened last. Recaps can be woven into many books seamlessly or near so. This book is a total fail in my opinion.

This one will appeal to fans of the series who have read the previous books and who enjoy the graphic novel style.

As an introduction to the series it is a terrible.