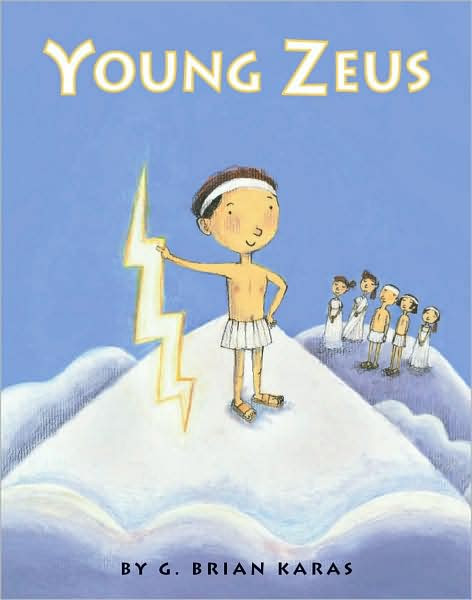 This is the story of how young Zeus, with a little help from six monsters, five gods (his brothers and sisters), his mother, and an enchanted she-goat (that's me!), became god of gods, master of lightning and thunder, and ruler over all.

On a night long, long ago, Rhea gave her baby Zeus to Amaltheia, the enchanted she-goat, who lived in a cave on the peaceful island of Crete.

A picture book introduction to Greek mythology and an introduction to the story of how Zeus became Zeus. The jacket flap is fun on this one. It reads, "A mighty tale for every kid who has ever wanted to shout: You are not the boss of me!"

Though this one is a picture book, I'd guess this one is more for older readers. There is a lot of text, and it might be tiresome as a read aloud for younger ones.

What did I think of this one? I liked it. Mostly. There were some things I really enjoyed. There were times it was really smart and funny. And times it was very playful. For example, towards the end we read:

It was settled. Young Zeus became ruler of heaven and earth. He divided up chores and scheduled playtimes. His mother, Rhea, was so proud.
And thus began fun and order on Mount Olympus.

I think it is successful in making mythology fun and understandable to kids.

© Becky Laney of Young Readers
Posted by Becky at 10:12 AM