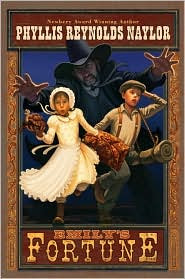 When eight-year-old Emily found herself alone in the world, she didn't have much: a few dresses, a couple of books, and a small green turtle named Rufus.

I can't say that I'm a fan of the cover. But. I don't think it's exactly fair to judge a book solely on the cover. I am glad I read this one. While I didn't love, love, love it, I did enjoy it.

What is Emily's Fortune about? Well, it's set in the Old West. Emily is an orphan who is trying to make her way west to live with her Aunt Hilda. Hilda is her preferred choice of guardian, though there is one who is a closer relation, a dreadful sort of uncle. Here is how Emily describes him. "Uncle Victor had the silver-black hair of a wolf, the eyes of a weasel, the growl of a bear, and a tiger tattoo on his arm." How will she get there? With a little help from her friends. Her first set of helpful friends are her neighbors. Mrs. Ready. Mrs. Aim. Mrs. Fire. Though she soon leaves their company, she never ceases to rely upon the advice she has received from them, the things she's learned from them. Her next friend is a new one. A young boy--who is a fellow orphan of course--named Jackson.

Her way west is full of one adventure after another. As you might expect!

What this one has going for it is that it is funny. It is definitely always trying to be funny in a sometimes clever, sometimes obvious kind of way. Like with her neighbors Ready, Aim, and Fire. And the Catchum Child-Catching Services. Each chapter tries to end in a cliff-hanger.

I might have liked this one a little bit more if Emily had been a bit more spirited.

© Becky Laney of Young Readers
Posted by Becky at 7:28 PM