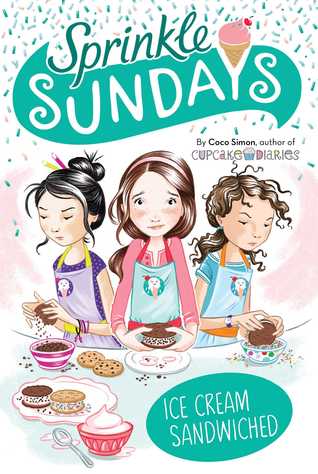 First sentence: I put the finishing touches on my book review as the school bus pulled into Vista Green School.

Premise/plot: Ice Cream Sandwiched is the fourth book in Coco Simon's Sprinkle Sundays series for middle schoolers. It is the second book narrated by Allie.

In the first book, Allie's parents get divorced. Allie moves with her mom and brother to a nearby town. She misses her best friends Tamiko and Sierra very much. Fortunately, these three friends find a way to be together each and every week by working together in her mom's ice cream shop. The second book is narrated by Tamiko. The third book is narrated by Sierra.

Allie is still having a bit of a time adjusting to her new life. She's made new friends. She's been able to keep her old friends too. She's getting along with her Mom and her Dad. (Though the brother might as well not exist for as much as he's mentioned.) But though things could always, always be worse, things aren't as smooth as she'd like them to be. For one thing, she feels caught between an arguing Sierra and Tamiko. And that's just one of the ways she feels "sandwiched." Allie struggles a bit to be true to herself for a bit, but ultimately she succeeds.

My thoughts: I like this series. It's enjoyable. It definitely has a bit of a wish fulfillment thing going on. It's not exactly one hundred percent realistic. (Three seventh graders who run an ice cream shop all on their own without adult supervision every Sunday afternoon while the owner (Allie's mom) is busy in the back. I doubt they've been trained and certified to handle/prepare food. And there is definite trust going on to let a seventh grader be responsible for all the cashiering.) But all that being said I am finding each title enjoyable enough that I want to keep up with the series as it's being released.