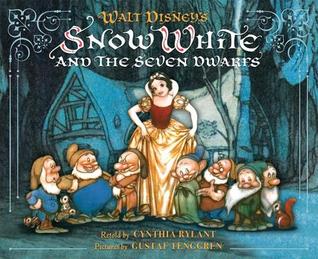 First sentence: It is when we are most lost that we sometimes find our truest friends. This is the story of Snow White.

Premise/plot: Cynthia Rylant beautifully retells the fairy tale Snow White and the Seven Dwarfs. It feels silly--beyond silly--to summarize the plot of so familiar a tale. Snow White is forced to take flight after her wicked stepmother tries to have her killed. She finds refuge--even happiness--in the home of the seven dwarfs. She loves them; they love her. But when the magic mirror reveals Snow White is still alive, well, her life is in danger once more. Will the queen's jealousy ever end? Will Snow White get her happily ever ending?

My thoughts: I LOVED this one. I loved the writing. Rylant did a beautiful job with the story.


But those with an evil heart seem to have a talent for destroying anything beautiful which is about to bloom. So it was that one day the Queen consulted the Magic Mirror, and Snow White's life was forever changed.

The dwarfs went inside and found Snow White asleep. When she awoke, Snow White told them her story. By the end of the telling, they loved her. How could they not? The Dwarfs had not known gentleness and beauty for a very long time.

Many stories in life have a happy ending, and this is one of them.

I also loved the illustrations by Gustaf Tenggren. Tenggren worked at Disney from 1936 to 1939. The films he worked on include Snow White and the Seven Dwarfs, Pinocchio, and Bambi. But he didn't just work at Disney. He illustrated a LOT of children's books. Books such as The Poky Little Puppy, The Shy Little Kitten, The Saggy Baggy Elephant, The Tawny, Scrawny Lion, Bedtime Stories, Farm Stories, and King Arthur and the Knights Around the Round Table. You can read more about his work here: http://www.gustaftenggren.com/tenggren/default.asp

I didn't grow up watching Snow White and the Seven Dwarfs. It wasn't released on VHS until I was in high school. (The Disney Wiki says October 1994. That sounds about right!) But I did grow up listening to the soundtrack on record. I do have favorites. I love and adore the Silly Song and the Dwarf's Washing Song. And then there's One Song.