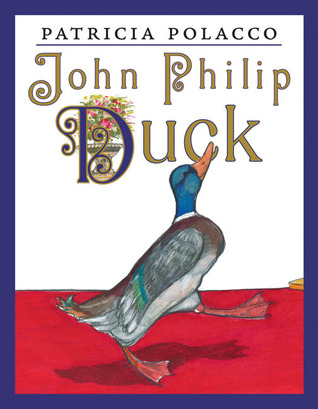 First sentence: Edward was a sweet boy who lived with his family on a small farm just outside Memphis in the foothills of Tennessee. Times were hard. there was a depression on and money was hard to come by. Even though Edward was just a lad, he and his father worked at the same hotel in Memphis. During the work week they stayed at the hotel, but on the weekends they both went home.

Premise/plot: Edward finds an abandoned little duckling; he decides to raise it as his very own. He takes the duck to work with him--at first with the intent to keep him completely out of sight. He teaches the duck tricks--trains him. The boss isn't happy to discover the duck in his hotel, but, he's happy enough when he sees the duck perform. Can Edward train other ducks too?! He's given a month. Will it be enough time?!

My thoughts: I enjoyed this one very much. Parents should definitely introduce their children to the music of John Philip Sousa before or after reading this one. (Sousa in Stereo). Edward LOVES, LOVES, LOVES Sousa's marches, and he trains his ducks to "march" to Sousa.

The goal becomes to train the ducks to march through the lobby and into the lobby's fountain, and to stay in the fountain and swim all day. At the end of the day, they will march out again. That is if all goes according to plan.

This one is loosely based on a true story. There are ducks at the Peabody hotel that were/are trained to do just that. Edward and his father are fictional representatives of that first duckmaster.