The Case of the Troublesome Turtle 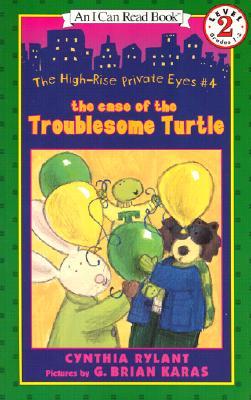 First sentence: Bunny enjoyed painting on Sundays. "Why don't you paint me?" asked Jack. "Because you won't sit still," said Bunny. "Yes, I will," said Jack. "No, you won't," said Bunny.

Premise/plot: Bunny and Jack have a new case to solve. Someone is stealing balloons from Mr. Paris' toy store. Can these two detectives figure out who or why? Often with these two they begin by focusing on the why to figure out the who. Why would anyone want to steal green and yellow balloons? Why are the balloons only stolen on Friday nights?

My thoughts: I enjoyed this one. It may be my favorite of the series. I'm not sure if kids enjoy the banter between Bunny and Jack as much as I do. I don't always love it. In some books it can be more annoying than amusing. But this one opens with Bunny painting a portrait of Jack. That illustration is hilarious!

I believe I've now read all the books in the series.