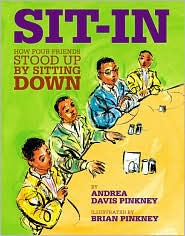 "We must...meet hate with love."
These were Dr. Martin Luther King Jr.'s words that got them started.
Four hungry friends. Eager to eat.
Each took a seat at the Woolworth's lunch counter
in Greensboro, North Carolina.
David, Joseph, Franklin, and Ezell sat quiet and still.
With hearts full of hope.
With Dr. King's words strong and close.
They were college students with a plan.
It was February 1, 1960.

This picture book very simply, very eloquently presents the story of one aspect of the Civil Rights Movement. The focus is on the peaceful protests, the sit-ins. It tells how four college students inspired others--many others--to join in the nonviolent fight for equal rights, for integration.

I thought the writing was great. I enjoyed the style very much.

This was the law's recipe for segregation.
Its instructions were easy to follow:
Do not combine white people with black people.
Segregation was a bitter mix.
Now, it was the friends' turn to ignore and refuse.
They ignored the law, and refused to leave until they were served.
Those kids had a recipe too.
A new brew called integration.
It was just as simple:
Combine black with white
to make sweet justice.
For them, integration was better than any chef's special.
Integration was finer than homemade cake.

For readers looking for more information, more background, the book features a Civil Rights Timeline and a bibliography.

© Becky Laney of Young Readers
Posted by Becky at 8:49 AM