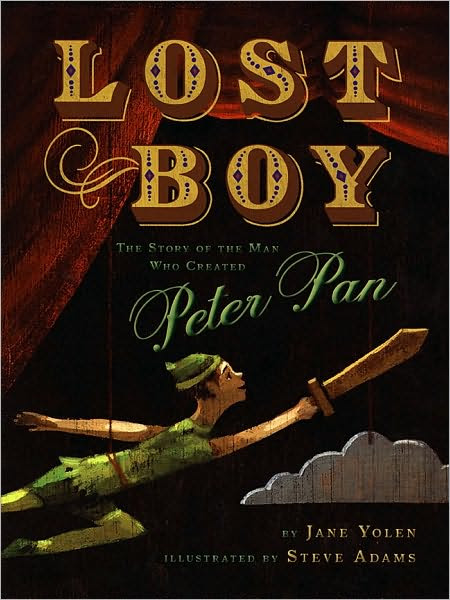 Once upon a time, on May 9, 1860, a baby boy was born in a low-built house, one of a row of such houses known as The Tenements, in the small town of Kirriemuir in Scotland. He was the seventh child, third boy. James Matthew Barrie wrote that his birth was of such little event in the family, what was celebrated on that day was that they'd bought six chairs. He talked of their poverty and how little they had. But though it was a story that he elaborated on for the rest of his life, it was not strictly true.

I loved this picture book biography of J.M. Barrie by Jane Yolen. I just loved it. Readers learn of Barrie's life--birth to death--and of his legacy. The focus is on his writing life, but it does share certain aspects of his personal life. For example, his friendship with the Davies family.

My favorite part of this one? How each spread incorporates quotes from J.M. Barrie's works. For example, for the first page--what I've quoted above--we have, "One girl is worth more than twenty boys." Readers are told that that quote comes the play Peter Pan. I thought Yolen did a great job of pairing up these biographical details with these fictional quotes. It made the book charming!