The 39 Clues: The Viper's Nest 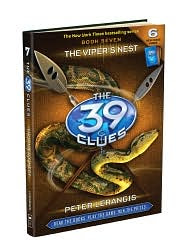 Amy Cahill didn't believe in omens. But black snow was falling, the earth was rumbling beneath her feet, her brother was meowing, and her uncle Alistair was prancing on the beach in pink pajamas. She had to admit, the signs were not promising.

Viper's Nest is probably my least favorite of the seven 39 Clues books which I've read. (The first six in the series are: The Maze of Bones, One False Note, The Sword Thief, Beyond the Grave, The Black Circle, and In Too Deep.) The series stars the brother-sister team of Dan and Amy Cahill. (Amy being the older, and Dan being the one with the incredible photographic memory.) Both children are part of the world-wide search for the thirty-nine clues. They're doing well, so far. They've been able to survive quite a few dangerous challenges. They've outwitted a few of their opponents. They've been surprised by the actions of some of the members of their own 'family' both past and present.

This adventure, for the most part, takes place in South Africa.

If you like action, adventure, and mystery these books may satisfy. I'm hoping to enjoy the rest of the series more than this one!