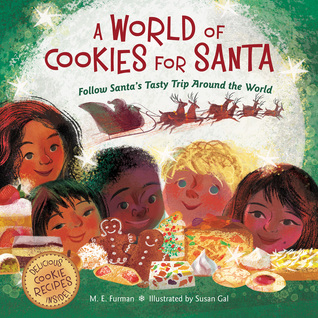 First sentence: All around the world, Christmas is a time of giving. While Santa Claus (also called Papai Noel, Father Christmas, Grandfather Frost, and more) packs his sleigh with gifts for children everywhere, they're preparing their own sweet gifts for him. Follow along on Santa's tasty trip around the globe, country by country and cookie by "cookie."

Premise/plot: This picture book introduces readers to thirty-two stops on Santa's journey around the world. There are definitely more countries in the world than thirty-two. But for a picture book, thirty-two is a good place to start. The journey begins on Christmas Island with chewy coconut macaroons and ends in Hawaii with pineapple-macadamia bars. Santa doesn't always drink milk. Some children leave tea, while others leave beer or wine.

Some of the stops along the way:


Japan
In Japan, Hoteiosha brings gifts and fortunes to children. They believe he has eyes in the back of his head so he can watch for children who are misbehaving. After he leaves their gifts on their pillow, Hoteiosha enjoys a slice of strawberry-topped Christmas cake the children put out for him.

Sri Lanka
On Christmas Eve in Sri Lanka, children come home from midnight mass and hang their stockings on the tree. After Naththal Seeya (Christmas Grandfather) puts their gifts in the stockings, he munches on kokis, a lacey fried cookie, while he sips the Ceylon tea the island country is famous for.

My thoughts: I found this one fascinating. It would probably be better suited for older children. But I think readers of all ages will find Santa's journey interesting. It also includes a handful of recipes--though not thirty-two!