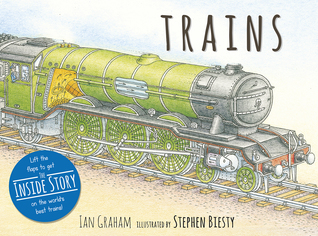 First sentence: The modern age of rail transport began in the early 1800s, when the first steam trains were built. The part of a train that pulls the cars is called the locomotive or engine. The locomotive shown here is called Patentee. Built in 1833 by Robert Stephenson, it was one of the first really successful locomotives. Many Patentees were built to pull trains in Britain, and the design was exported to other countries.

Premise/plot: Don't be fooled by the fact that it's an oversized board book with flaps to lift, this one is for older children. This book might be the wordiest sixteen page book I've ever come across. It features cross sections of eight trains: early steam trains, American steam trains, the golden age of steam, diesel replaces steam, electric trains, heavy-duty diesel trains, high speed trains, and trains of the future. Each two-page spread is packed--and I do mean PACKED--with information.

My thoughts: There is a lot of information to process in this book. I did not read it cover-to-cover and lift every flap. I'm not personally *that* interested in trains. I think there are people--of various ages--that are that interested in trains. I do think some people never out grow a love of trains. I could see this book growing with your child. Perhaps at first this is more of a book that you browse and skim, and then perhaps later one that you read every word.