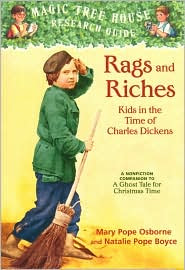 In the 1800s, England was a very powerful country. The city of London was the largest, richest city in the world. Signs of the city's wealth were everywhere. Parks, stores, factories, and beautiful buildings filled the city.

While I wouldn't go so far as to say this is great nonfiction, I enjoyed it so much more than the companion fiction novel. It is informative. It is well-organized. It is simple in a kid-friendly way, but not in a condescending way. I liked reading about the aspects of culture and society. I liked how it focused both on Dickens himself and on his time. (One chapter is focused on Charles Dickens, "What Charles Dickens Saw," but the rest focus on London, on Victorian England.) Readers learn about the Industrial Revolution, factories, and working conditions within those factories. Readers learn about some of the *horrible* jobs that were the only ones readily available for the poor. But readers also get a glimpse of the other side. What life was like for the wealthier people.

I liked the amount of information in this one. I thought it was packed with information. (Much more than I was expecting.) And I liked the use of photographs. I wasn't thrilled that these photos were side by side with the cartoonish illustrations in the Magic Treehouse style. But, overall, I can say I liked this one.

© Becky Laney of Young Readers
Posted by Becky at 10:44 AM