Horrid Henry and the Abominable Snowman 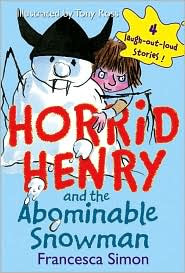 Milksop Miles is the author visiting Perfect Peter. He's the author of "The Happy Nappy." Here is how Horrid Henry describes it:


The Happy Nappy! Only the dumbest book ever. All those giant diapers with names like Rappy Nappy and Zappy Nappy and Tappy Nappy dancing and prancing around. And then the truly horrible Gappy Nappy, who was always wailing, "I'm leaking!" Horrid Henry shuddered. He was amazed that Milksop Miles dared to show his face after writing such a boring book. (70-1)

I enjoyed each of the stories in this Horrid Henry book. Here are the others in the series that I've read and reviewed:

© Becky Laney of Young Readers
Posted by Becky at 8:59 PM