Ling & Ting: Not Exactly the Same 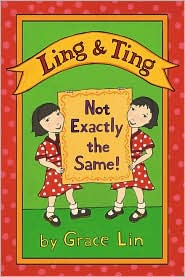 I really enjoyed Grace Lin's Not Exactly the Same. I thought it was a great early chapter book for young readers. The book is divided into six chapters. The stories are about simple things, ordinary things. But that doesn't mean they are boring! I enjoyed the simplicity of it. How it captured life. I think my favorite story was "Making Dumplings."

© Becky Laney of Young Readers
Posted by Becky at 8:34 AM