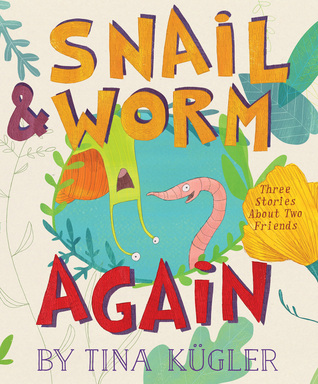 First sentence: Hey! Wow! What is going on?

Premise/plot: Snail and Worm are back for three more stories in Tina Kugler's Snail and Worm Again. In the first story, Snail's Wings, Snail "grows" wings and prepares to fly away. But will he really??? In the second story, The Mirror, the two friends find a "mirror." What did they really find???? In the third story, Snail is Sad, Snail is having an off day because he doesn't feel all that special--to be exact, he doesn't think his shell is all that special. Can Worm cheer him up???

My thoughts: I enjoyed these three stories! I might even have enjoyed these three more than the original three. It's so hard to tell with books like these. The sequel books have a slight advantage in that you are already familiar with the characters and your expectations are usually right on.

I love the humor in these stories--well in two of the three stories. I love that so much depends on the artwork itself instead of the text. Especially in The Mirror!

I would recommend this one!!!