54. Charlie and the Great Glass Elevator 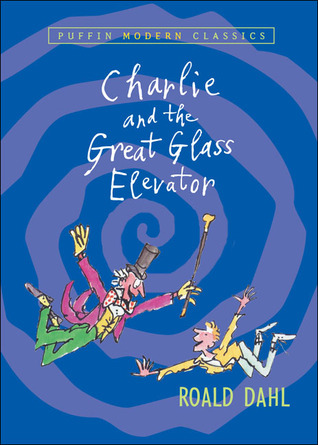 First sentence: The last time we saw Charlie, he was riding high above his home town in the Great Glass Elevator.

Premise/plot: This one begins seconds after Charlie and the Chocolate Factory ends. And the whole book covers essentially just one day--possibly two. Mr. Willy Wonka is more eccentric than before--you might not have thought that possible. He's gathered all the family--Charlie, Grandpa Joe, Grandma Josephine, Grandpa George, Grandma Georgina, Mr. and Mrs. Bucket--in the Great Glass Elevator and instead of, you know, just walking back to the factory--which I believe is within sight of the Bucket's home--he wants to go up, up, up, up, up, up, up, up and come crashing down from space into the chocolate candy making factory. But things don't go according to his plan. For they enter earth's orbit....witness some crazy stuff at a space hotel...including a close encounter with a hostile alien species...before returning to the factory for more crazy close-calls. (Wonka-Vite and Vita-Wonk?!)

My thoughts: I loved, loved, loved Charlie and the Chocolate Factory. I never loved the sequel Charlie and the Great Glass Elevator. It is quirky and odd, but it failed to delight in the same way. The plot just didn't work for me. Half the book takes place in space or on/near a space hotel--all within the glass elevator. And the other half of the novel takes place back in the factory and involves one of Wonka's inventions. The humor of the space section just did not work for me. It felt dated and off, a bit inappropriate.

The president threw the phone across the room at the Postmaster General. It hit him in the stomach. "What's the matter with this thing?" shouted the President. "It is very difficult to phone people in China, Mr. President," said the Postmaster General. "The country's so full of Wings and Wongs, every time you wing you get the wong number." "You're not kidding," said the President... The President again picked up the receiver. "Gleetings, honorable Mr. Plesident," said a soft faraway voice. "Here is Assistant Plemier Chu-On-Dat speaking. How can I do for you?" "Knock-knock," said the President. "Who der?" "Ginger." "Ginger who?" "Ginger yourself much when you fell off the Great Wall of China?" said the President. "Okay, Chu-on-Dat. Let me speak to Premier How-Yu-Bin." "Much regret Premier How-Yu-Bin not here just this second, Mr. Plesident." "Where is he?" He outside mending a flat tire on his bicycle." "Oh no, he isn't," said the President. "You can't fool me, you crafty old mandarin! At this very minute he's boarding our magnificent Space Hotel with seven other rascals to blow it up!" "Excuse pleese, Mr. Plesident. You make big mistake." "No mistake!" barked the President. "And if you don't call them off right away I'm going to tell my Chief of the Army to blow them all sky high! So chew on that, Chu-on-Dat!" "Hooray!" said the Chief of the Army. "Let's blow everyone up! Bang-bang! Bang-bang!" (30-1)

It's not that I hated every page of this one. I just didn't find enough positives to overcome the negatives.

Have you read this one? What did you think?