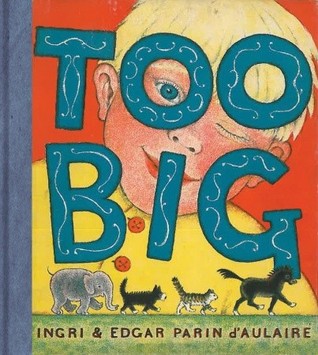 Premise/plot: The boy in this story has outgrown all his favorite things. He's just too big now. But being too big won't keep him from dreaming big.

My thoughts: Too Big was originally published in 1945. I personally love the vintage illustrations. I particularly love the cat and dog. I want to crawl into the book and just play with them and pet them. Half the illustrations are in color, the other half are in black and white. The story itself is very simple. To be honest, there's not much text to it at all! This being for better or worse. The repetition is strong with this one. Some sentences worked better for me than others. For example, it's easy to outgrow clothes, shoes, hats, etc. But the authors use the phrase "too big" to also stand in for "big enough to know better." (So he's too big to play rough with the cat.) The whole sequence with the horse just confused me. (Another thing I found confusing, why does the boy's milk glass read GOOD BOY?)