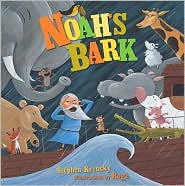 Noah's Bark. Stephen Krensky. Illustrations by Roge. 2010. [April 2010] Lerner Publishing. 32 pages.
Long, long ago, when people were still few and far between, the world was full of confusing sounds. Mostly, the animals made it that way. They were loud and silly and said whatever came into their heads.
Beavers crowed when the sun came up. Snakes quacked in distress. Pigs howled at the full moon. And mighty elephants hissed in fear.
This is one very silly book. It's a book that showcases animal sounds. (It's a nonreligious spin on Noah's ark.) One that focuses on animals, animal sounds, and the disorder that could arise from having so many animals in such a tight space.
The writing was funny. (If humor is what you're going for in the story of the flood.) There were some great lines that really worked:

Down below, the animals were crowded together, trying to keep their pointy parts to themselves.

This is a cute story about "how" animals got their sounds and learned to cooperate under difficult circumstances.
I could see this one being great to share with little ones who giggle about animal sounds and noises in the first place.

© Becky Laney of Young Readers
Posted by Becky at 7:02 PM