The Boy Who Invented TV 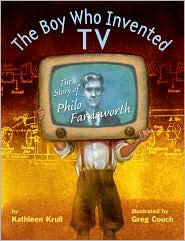 Who is Philo Farnsworth? Why, he's the one who invented TV, and in Kathleen Krull's The Boy Who Invented TV, you'll learn all about him. From the antique TV endpapers--fabulous, in my opinion--to the author's note, this one had me hooked. (And it's not because I'm a science geek.) Here's how it starts off:

"No sooner did Philo Farnsworth learn to talk than he asked a question. Then another, and another. His parents answered as best they could."

Krull presents a biography of this little known and under-appreciated genius. At first glance, he may seem like just an ordinary kid, a farm kid at that, but his curiosity and fascination with learning--especially learning how things work on the technical/mechanical side made him stand out. I love the fact that it was while he was doing his farm work that inspiration struck.

One bright, sunny day, fourteen-year-old Philo plowed the potato fields. It was the best chore for thinking--out in the open country by himself. Back and forth, back and forth...the plow created rows of overturned earth. He looked behind him at the lines he was carving--perfectly parallel. Then he almost fell off the plow seat. All his thoughts fused together. Instead of seeing rows of dirt, he saw a way to create television: breaking down images into parallel lines of light, capturing them and transmitting them as electrons, then reassembling them for a viewer. If it was done quickly enough, people's eyes could be tricked into seeing a complete picture instead of lines.

What did I like about this one? I think it has appeal to those that love the human side of science as well as appealing to those that like science science. I fall into the first category. Show me a documentary on scientists and inventors, and I'm there, I'm hooked. I like the human side of science, the people behind the ideas. I did try this one out on my dad who's closer to falling into the second category. He enjoyed this one as well.