Nathaniel Fludd: Flight of the Phoenix 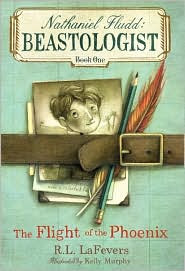 It was one of the most important moments in Nathaniel Fludd's young life, and he was stuck sitting in the corner.

I love that first line. (What say you? Does it make you want to know more?) Nathaniel Fludd, our hero, is about to learn that his parents have died--they're presumed dead at least. They left him several years earlier--in the care of his governess, Miss Lumpton--and went off adventuring. Promising him that they'd write. That they'd send for him when he was old enough to have gotten an adventurous spirit (and heart.)

"You need a little more time to grow up," his father had said. "When you're old enough to travel well and your sense of adventure has developed, we'll send for you then."
Time had passed. On his eighth birthday, Nate had been excited, but nervous, too. He wasn't sure his love of adventure had shown up yet. But his parents' letter asking him to join them never showed up, either. "Just as well," Miss Lumpton had sniffed. "Their job is much too important to have a youngster tagging along, getting in the way."
On his ninth birthday Nate had been hopeful. Miss Lumpton told him not to be silly. His parents' work was much too dangerous for a young boy. Especially a young boy like himself, one who liked quiet walks, reading, and drawing. Clearly he wasn't suited to a life of adventure. Nate was a little disappointed--he thought he had felt the smallest beginning of an adventurous spark.
By his tenth birthday, Nate had buried the memory of his parents and never took it out anymore. Much like a toy he'd outgrown, he told himself. But the truth was, thinking of them hurt too much. (3-4)

After Miss Lumpton is given a tidy sum, Nate is sent to live with his father's cousin, Phil A. Fludd. Phil, surprise, surprise, is a woman. But that doesn't mean she can't live up to the Fludd name and be a great adventurer. She's a bit shocked that Nate hasn't been taught the trade, he knows nothing about being an adventurer, about living an exciting and dangerous life. But she's determined to train him up right!

I liked this one. It features black and white illustrations by Kelly Murphy. It's a nice blend of mystery, adventure, and humor.

© Becky Laney of Young Readers
Posted by Becky at 3:10 PM