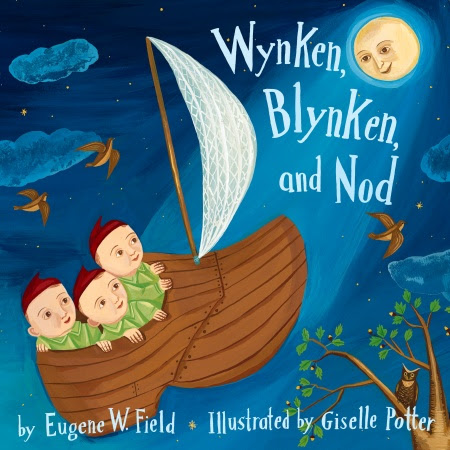 Newly illustrated by Giselle Potter, Wynken, Blynken, and Nod is a classic children's poem by Eugene W. Field. Though I don't specifically recall this one from my own childhood, I showed the book to my mother. She not only knew about Wynken, Blynken, and Nod but she began to list off other poems by Eugene W. Field. And as if that wasn't enough, she then began to sing some of his poems. So it's all a matter of context I suppose.

You can read the poem in its entirety here. Though I thought I'd share the first verse,

Wynken, Blynken, and Nod one night
Sailed off in a wooden shoe---
Sailed on a river of crystal light,
Into a sea of dew.
"Where are you going, and what do you wish?"
The old moon asked the three.
"We have come to fish for the herring fish
That live in this beautiful sea;
Nets of silver and gold have we!"
Said Wynken,
Blynken,
And Nod.

I can't say that I'm a huge fan of the poem. (I don't dislike it. But I don't love it either.) But I can say that I enjoyed the illustrations by Giselle Potter. Some of them were just amazing. They were simply beautiful. And they drew you into the story.

Other reviews (from folks that love the poem and the illustrations both) include: A Well Read Child, Jen Robinson's Book Page, A Patchwork of Books, Seven Impossible Things Before Breakfast.
Posted by Becky at 10:37 AM