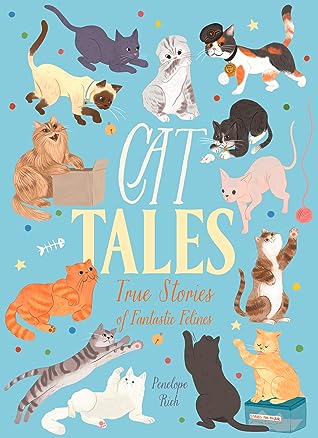 First sentence: Cats are the most commonly kept pets in the world. The relationship between people and cats goes back thousands of years, and the more we uncover about our past, the more we see that cats have been living alongside us for longer than we ever knew.

Blended in with these stories are a few more generalized articles about cats. Descriptions. Behaviors. Advice.

As is the case with a book of stories--true or not--I found myself loving some, liking some, and well, not caring equally about each and every one.

Here is one of my favorites,

This is another story about a brave cat during World War II. Faith was the name given to a plucky stray cat who sought sanctuary in St. Augustine’s and St. Faith Church in the City of London. She became a much-loved member of the congregation, and in return for food, shelter, and affection, she kept the mice at bay. In August, the rector noticed she was getting fatter, and one morning, when she didn’t turn up for breakfast, Father Ross found her curled up in her basket with a kitten. It was white with black ears and tail, and because of its markings, the little tom was named Panda. On September 6, Faith pleaded with Father Ross to let her out of his study. She picked up Panda by the scruff of his neck and took him to a cold nook in the basement. Twice, Father Ross gently carried Panda back to the warmth of the basket, but each time Faith took her kitten back down. Realizing that Faith felt that Panda was in some kind of danger, Father Ross brought the basket down and left them snuggling together. Three days later, Father Ross was returning home when the air-raid sirens sounded. He spent the night in a shelter, and woke up to the news that many buildings had been destroyed. St. Augustine’s had suffered a direct hit and, a fire officer told him that no one could have survived, not even a cat. Risking his own life, Father Ross searched through the rubble for Faith until he heard a muffled meow. Faith was dusty but uninjured, and underneath her was Panda, safe and sound. Not long after, the church roof collapsed.
The story of Faith’s devotion to her kitten spread. She was proposed for a Dickin Medal, but as this was only awarded to animals in the armed forces, Faith was awarded a special silver medal instead—an event that was reported in newspapers worldwide. Father Ross had her photo taken, and his dedication to her began: “Faith… the bravest cat in the world.”