12. The Tale of Miss Kitty Cat 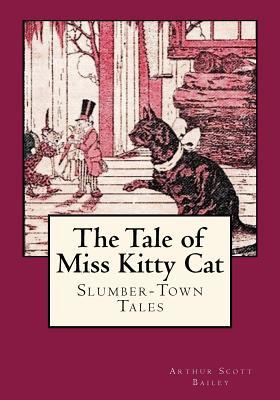 First sentence: The rats and the mice thought that Miss Kitty Cat was a terrible person. She was altogether too fond of hunting them. They agreed, however, that in one way it was pleasant to have her about the farmhouse. When she washed her face, while sitting on the doorsteps, they knew—so they said!—that it was going to rain. And then Mrs. Rat never would let her husband leave home without taking his umbrella.

Premise/plot: The Tale of Miss Kitty Cat is a vintage early chapter book. The setting is Farmer Green's farm and it primarily focuses on Miss Kitty Cat's adventures and misadventures. While Mrs. Green and her son, Johnny, often give her pets and enjoy her company, the family dog, Spot, is less desirable a companion. Spot likes to chase Miss Kitty Cat, and she has little tolerance for his nonsense.

There are twenty-four chapters in all, but the chapters are super short.

My thoughts: I found this vintage chapter book charming! I thought Miss Kitty Cat was a great narrator. I could easily believe it was written from a cat's point of view!

When Miss Kitty Cat awoke from her nap she got up and stretched herself. In her opinion, a nap was no nap at all if one didn't stretch after taking it. "There's nothing like a good stretch to make a person limber," she often remarked.

"I declare!" Farmer Green's wife cried one day. "Somebody's been stealing my cream in the buttery."

The buttery was a big bare room on the shady side of the house, where great pans of milk stood on a long table. When the cream was thick enough on the milk Mrs. Green skimmed it off and put it in cans. At one end of the buttery there was a trap door in the floor. When the trap was raised you could look right down into a well. And into its cool depths Mrs. Green dropped her cans of cream by means of a rope, which she fastened to a beam under the floor, so the tops of the cans would stay out of the water.

Mrs. Green made butter out of that cream. So it was no wonder she was upset when she discovered that some one had meddled with one of her pans of milk.

"It can't be the cat," said Farmer Green's wife. "The buttery door has been shut tight all the time."

Miss Kitty Cat was right there in the kitchen while Mrs. Green was talking to her husband. And it was easy to see that Miss Kitty agreed with her mistress. She came close to Mrs. Green and purred, saying quite plainly that she was a good, honest cat and that she deserved to be petted. At least, that was what Mrs. Green understood her to mean.

Often, after that, Mrs. Green discovered traces of the thief in the buttery. Flecks of cream on the side of a milk pan, drops of cream on the table, smudges of cream now and then on the floor! Such signs meant something. But Farmer Green's wife couldn't decide what.

And another strange thing happened. Miss Kitty Cat lost her appetite for milk. She would leave her saucer of milk untasted on the kitchen floor.

Now and then Mrs. Green picked Miss Kitty up and looked closely at her face. At such times Miss Kitty purred pleasantly. She did not seem to be the least bit disturbed.

One evening, after dark, Johnnie Green went into the buttery to get a pail. The moment he opened the door there was a crash and a clatter inside the room.

"There's somebody in the buttery!" he shouted.

But when his father brought a light they found no one there. A tin dipper lay on the floor.

"When you opened the door it must have jarred the dipper off the edge of the table," said Farmer Green.

"Meaow!" said a voice behind them. There stood Miss Kitty Cat, saying that everything must have happened exactly as Farmer Green said.

"She couldn't have been in here, could she?" Farmer Green puzzled. "Come, Kitty!" And he picked up Miss Kitty and held her where the light fell full upon her face. "Clean as a whistle!" said Farmer Green. "I guess she just followed us in." He set her down again. And once more, with a plaintive meaow she agreed with him perfectly.

Farmer Green's wife threw away pan after pan of milk, because she knew somebody had been stealing cream off the top of them. At least, she told Farmer Green to feed the milk to the pigs, because she wasn't going to make butter of any cream that had been tampered with by goodness knew whom or what. And old dog Spot said that feeding good creamy milk to the pigs was just the same as throwing it away. He made that remark to Miss Kitty Cat, adding that it was a shame that somebody was stealing cream and declaring that he hoped to catch the thief.

"Please don't speak to me!" Miss Kitty Cat exclaimed impatiently. "I don't enjoy your talk; and you may as well know it."

"She's jealous," Spot thought. "She knows I'm a good watch dog. And she can't bear the idea of my catching a thief."

It was hard, usually, to tell how Miss Kitty Cat felt about anything. She was a great one for keeping her opinions to herself. It seemed as if she wanted to be let alone by every one except Farmer Green's family.

Having boasted about catching the cream thief, old dog Spot began to watch the buttery very carefully. Search as he would, he couldn't find a chink anywhere that was big enough even for a mouse to squeeze through.

One day he happened to catch a glimpse of something moving under the roof of the shed next the buttery. To his amazement he saw Miss Kitty Cat slip through an old stove-pipe hole that pierced the great chimney which led down into the buttery, where there was an ancient fireplace which hadn't been used for years and years. Miss Kitty Cat crept along a tiebeam and hid herself in a pile of odds and ends that somebody had stowed high up under the roof and left there to gather dust and cob-webs.

"Ah, ha!" said Spot under his breath. "This is interesting."

When Miss Kitty Cat visited the kitchen a little later there wasn't a speck of dirt on her coat. And her face was spotless. No one would have guessed that she had ever made her way through an old chimney.

Old dog Spot said nothing to her then. But he chuckled to himself. He had a plan that pleased him hugely.

All this happened on a morning. And late that afternoon when Miss Kitty Cat wasn't anywhere to be seen, and Farmer Green's wife opened the buttery door to get a pitcher of cream for supper, Spot suddenly began to bark in the shed. He scrambled up a stepladder that leaned against the wall and stood on the top of it while he pawed the air frantically, as if he were trying to fly.

The noise brought Mrs. Green hurriedly out of the buttery. And she was just in time to see Miss Kitty Cat peer out of the old stove-pipe hole, with a creamy look about her mouth.

Well, the cat was out of the bag at last. Or perhaps it would be more exact to say that Miss Kitty was out of the buttery. Anyhow, it was very plain to Mrs. Green that she had been in the buttery only a moment before, lapping thick cream off a pan of milk. And she hadn't had time to wash her face.

After that Farmer Green stopped up the stove-pipe hole. And soon Miss Kitty's appetite for milk returned. When Mrs. Green set out her saucer of milk for her Miss Kitty lapped it up greedily—and even licked the saucer clean.

Old dog Spot watched her with a grin.

"I let you know when I caught the cream thief, just as I promised you I would," he jeered.

"Don't boast!" she said. "It's a disagreeable thing to do.... Besides, I knew—long before you did—who was taking Mrs. Green's cream."