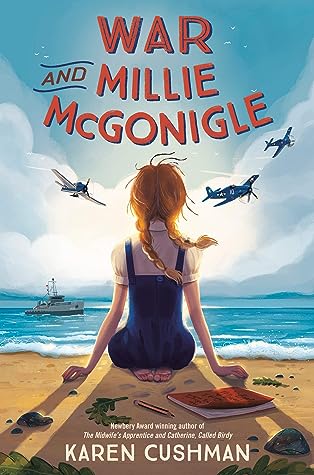 First sentence:  George lifted the slimy creature to his mouth and bit it right between the eyes. I’d seen him and the other Portuguese octopus fishermen do that a hundred times, but it still made me shudder. “Doesn’t that taste muddy and disgusting?” “Nah,” he said, wiping his mouth on his sleeve. “Only salty. I told you, this way he don’t die but only sleeps, stays fresh ’til he’s cooked.” George threw the octopus into a bucket and slid over to another hole in the mud.

Premise/plot: War and Millie McGonigle is a coming of age middle grade historical novel set in California in late 1941 and early 1942. Our heroine, Millie McGonigle, is struggling. Why? Perhaps the better question may be why not?!?! Her grandmother has died. Her sister, Lily, is sick and "stealing" all the attention and love of her parents. Horrible things are happening around the world. What if America enters the war? What if there are really Japanese or German spies?

Millie takes all her anxiety and directs it to her BOOK OF DEATH. Yes, this young heroine likes to make a list of the dead and/or to draw the dead she discovers. She strolls along the beach and sketches all the dead things she finds. (And she's sure to make a great first impression on all the new people she meets as she interrogates them to find out if anyone has died lately so she can record it for her book.)

My thoughts: The cover isn't nearly morbid enough to match the contents of this weird coming of age novel. (If I'm being honest I feel the cover is being intentionally deceptive.) Millie is obsessed with death. OBSESSED.

Her parents don't seem to notice how morbid their daughter has become since the grandma's death. Perhaps because authentically enough the whole family is struggling emotionally and mentally. It's the Depression. They're barely barely making enough money to get by. They eat fish every single day. And one of their daughters is sickly and always needing extra care, extra attention, extra money. Again they are broke, broke, super broke. So perhaps the fact that they're not really connected enough to notice Millie's morbidity isn't all that surprising.

It stays dark for so long--despite the cheerful looking cover--that when Millie does finally, finally, finally see some hope for the future....you may be out of patience.

This book has a disturbing BEYOND DISTURBING hideously EVIL AND WRONG chapter where her brother brings her a DEAD AND DECAYING DOG that he and his friend have dug up to bring her so that she has something new to draw for her book. Think about it. DISTURBING on so many levels. Even worse is that this is a detailed, descriptive chapter so if you have even the teeny tiniest liking for dogs you'd be disgusted, outraged, and ready to throw the book across the room.