38. A Dog on Barkharm Street 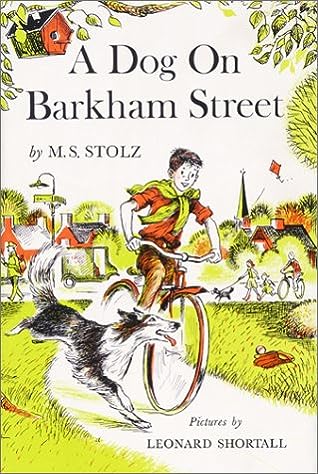 First sentence: Edward Frost, who had his share of problems, didn’t see how he’d ever solve the biggest one. This was Martin Hastings, the bully of Barkham Street. Martin was two years older than Edward, and there was no solution for this. Martin would continue to be two years older until he was a hundred and Edward was ninety-eight. Edward had a feeling that even then he might not be entirely safe.

Premise/plot: Edward, our hero, has two big “problems.” The first is that he is the primary target of the school bully. The two are not in the same class, but they live next door to each other. Martin, the “bully” has been held back once, possibly twice. (Edward jokes that Martin is so dumb he probably can’t even read.) The second is that his “mean” parents won’t let him get a dog. To Edward and his best, best friend Rod, having a dog is the most important thing in the world.

Edward wants to a) avoid Martin at school and home, b) convince his parents to let him have a dog, c) magically become good at being responsible without practicing responsibility. He’ll get a few opportunities when his uncle, a “hobo” or “tramp” comes to stay for a few weeks. He brings with him a stray dog that has joined him in his wandering.

My thoughts: This was originally published in 1960. It deals with two universals. A boy needing, wanting, having to have a DOG. A boy being picked on by a bully.

The writing is excellent. I loved, loved, loved the narrative voice and style. I loved Edward’s relationships with his family and best friend. My favorite chapter may be when he tidied up his room....

I am still not sure what to make of the hobo theme. He is choosing not to stay in any one town and not be tied down by a job or possessions. He glorifies the wandering nomad life—sleeping out under the stars wherever he wants, seeing the world, doing life on his own terms.

“Be sure you soap behind your ears.”
Edward stopped feeling tender. “Mother,” he said, in a firm, patient voice, “this isn’t my night for soap.”
“What do you mean?” she said. “It isn’t your night for soap? Every night is a night for soap. Soap goes with the bath.”
“Not with mine it doesn’t,” Edward explained. “One night soap. Next night no soap. Why do I have to take a bath every night, anyway?” (37)

It was a funny thing, he mused, piling things in the box for the Salvation Army, that lots of times he asked for things not really much wanting them at all. For instance, jigsaw puzzles. He didn’t actually want any, he didn’t even like doing them very much when he got them, but the habit of asking was just one he sort of had. He asked for Good Humors if the Good Humor Man happened to be around, clothes if he happened to be in a store where they sold him, toys if he happened to see them in an advertisement or a shop window. He guessed that one way and another he asked for something or other every single day whether he wanted it or not. Sometimes he got the thing and sometimes he didn’t, but anyone could see that the asking annoyed parents. (28)