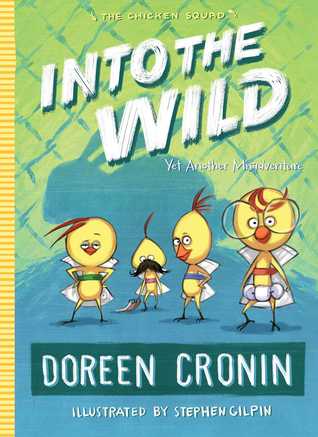 First sentence:  "I got a bad feeling about that new box over there," said Sugar.

Premise/plot: Dirt (Peep), Sugar (Little Boo), Poppy (Poppy), and Sweetie (Sweet Coconut Louise) ARE the chicken squad. Supposedly these chicks are DETECTIVES who solve cases. In this one no one has come to them asking for help. Barbara--their owner--has built a box in her backyard. It is CONFUSING the chicks--greatly. Who is in the box?

My thoughts: This is the third book in the Chicken Squad series. In this one, the four chicks try to piece together the mystery of WHO is in the BOX in the backyard. Is it a real case since no one has come to ask them for help? Since the chicks are just curious themselves? This early reader series is only a mystery series in the very lightest of terms. The characterization has just as much substance as the mysteries--that is it's almost nonexistent. But it's a quick read with a few laughs.