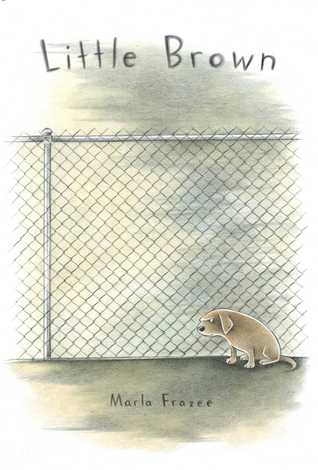 Why doesn't Little Brown have friends? Does his crankiness keep the other dogs from liking him, playing with him, being his friends? Or is it his loneliness--his lack of friends and playmates--making him cranky? If the other dogs were his friends--if they took the first step--would he stop being cranky? What if he took the first step--would they reject him? Wouldn't that make him even crankier to be rejected?

Here is a line that got to me, "But Little Brown did nothing and did it alone."

The second time I read this one I liked it better. I identified with it more. Who hasn't been Little Brown at some point? (Is Little Brown the dog version of Alexander and the Terrible, Horrible, No Good Very Bad Day?!) Who hasn't experienced cranky days? Who hasn't experienced loneliness? The truth is that it is almost always scary to take that first step. I don't know that kindness is ever super-super easy. But. It is true that it easier to be a kind to someone who is "nice" and "friendly" and "cheerful." It is more difficult to be kind to someone who is "cranky" or "mean" or "sad" or "angry" or "lonely" or "bitter." The people who need our kindness the most can be the most difficult to reach out to.


"First of all," he said, "if you can learn a simple trick, Scout, you'll get along a lot better with all kinds of folks. You never really understand a person until you consider things from his point of view--"
"Sir?"
"--until you climb into his skin and walk around in it." (Harper Lee, To Kill A Mockingbird, 30)

If there is a lesson in Little Brown, perhaps it's an interactive lesson in perception and empathy. When Little Brown is cranky what other emotions could he be feeling?