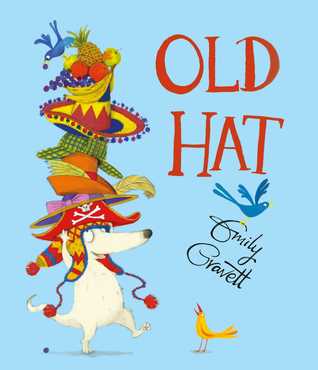 First sentence: Harbet had a hat. His Nana had knitted it for him when he was little. It was warm and cozy, and it kept his ears toasty. It was an...OLD HAT!

Premise/plot: Does Harbet need new hats or new friends? That isn't exactly the problem as Harbet sees it, but it's how this adult reader sees it. Harbet is a dog that gets teased for wearing an old hat. The first teasing incident might have some basis of truth. It is an old hat--a beloved old hat upon his head. But all the other incidents, well, that's more bullying in my opinion. Harbet copies the hats of his friends time after time after time after time. He even starts subscribing to the same hat-themed magazines that his friends do. Always the response is the same: OLD HAT. If Harbet is wearing it, it is no longer cool. Will Harbet learn a lesson by the end of the book?

My thoughts: I enjoyed this one. I did. I personally LOVED the hat his Nana made him. I would have seen nothing wrong with him keeping that old hat. It was a good, practical, traditional hat. Some of these other hats are OVER-THE-TOP ridiculous. This says something about trends in general, trends for kids and adults. And perhaps a little something about our materialistic market-driven culture as well. Nothing is too extreme if you market it just right and have influencers.

His friends. Are they really ever his friends? I like that Harbet really only becomes happy or content when he stops caring what they say...or what they think.