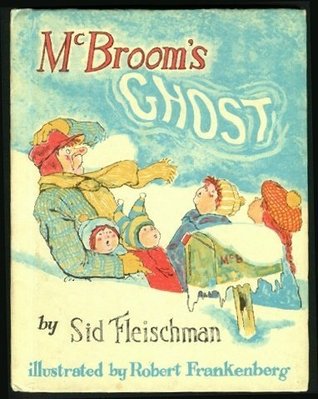 First sentence:  Ghosts? Mercy, yes--I can tell you a thing or three about ghosts. As sure as my name's Josh McBroom a haunt came lurking about or wonderful one-acre farm. I don't know when that confounded dry-bones first moved in with us, but I suspicion it was last winter. An uncommon cold winter it was, too, though not so cold that an honest man would tell fibs about it. Still, you had to be careful when you lit a match. The flame would freeze and you had to wait for a thaw to blow it out.

Premise/plot: Does McBroom's one-acre farm have a ghost? Perhaps. This read-aloud gem takes place over two winters, I believe. In this one, McBroom has to solve the mystery of is-there-a-ghost-haunting-the-farm? AND solve a problem he is having with his neighbor and his hogs.

My thoughts: I would recommend this one to anyone who has read and loved McBroom's Wonderful One-Acre Farm, Three Tall Tales (1966). I love, love, love McBroom as a narrator. And the adventures he has with his family on the farm are quite unbelievable.


I don't intend to stray from the facts, but I distinctly remember one day Polly dropped her comb on the floor and when she picked it up the teeth were chattering.

The temperature kept dropping and I must admit some downright unusual things began to happen. For one thing smoke took to freezing in the chimney. I had to blast it out with a shotgun three times a day. And we couldn't sit down to a bowl of Mama's hot soup before a crust of ice formed on top. The girls used to set the table with a knife, a fork, a spoon--and an ice pick.

Then the big freeze set in. Red barns for miles around turned blue with the cold.