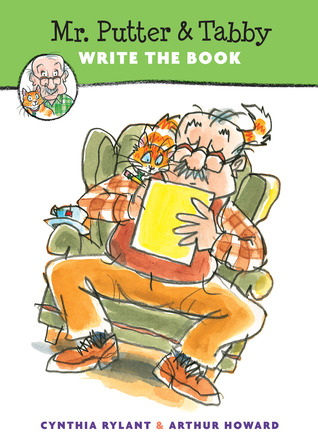 Premise/plot: In this early chapter book, Mr. Putter has an idea. At first it seems straightforward and simple. He wants to write a book: a mystery novel.


First he had to think of a title. He thought and thought and thought. Finally he told Tabby, "I shall call my book The Mystery of Lighthouse Cove." It was a very good title. It was full of mystery. As a boy he had read lots of books with titles like that.

He's so excited that he thought of a title that he celebrates by fixing a snack...and then taking a nap. Will Mr. Putter write a book?

My thoughts: I enjoyed this one very much. Sometimes the book you think you want to write isn't the book you need to write. I thought this one was funny and charming.

I think everyone should write a book like Mr. Putter does. (It is NOT a mystery novel, but a list of good things that he's blessed with and thankful for.)