The Complete Adventures of Curious George This anthology contains these original stories:
It also contains an introduction by Leonard S. Marcus, a publisher's perspective on Curious George, a retrospective essay, and a photographic album of Margret and H.A. Rey. 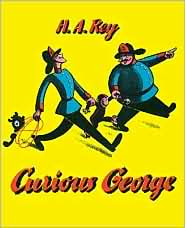 This is George.
He lived in Africa.
He was a good little monkey
and always very curious.
One day George saw a man.
He had on a large yellow straw hat.
The man saw George too.
"What a nice little monkey," he thought.
"I would like to take him home with me."

The first adventure has George being taken from his happy jungle home by the man in the yellow hat. We're told that George--after the ocean voyage--will live in the zoo. My question is why is the man in the yellow hat so intent on taking George with him if he's just going to be put into the zoo?! Is that the man in the yellow hat's job? To find animals in his travels and place them into zoos? It would make more sense if he wanted George as a pet. George does end up in the zoo. Eventually. But it's a busy couple of days first! He smokes a pipe, phones the fire department, spends time in prison, escapes from prison, and goes on quite an exciting balloon ride. 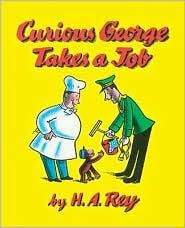 My thoughts on Curious George Takes A Job (1947)

This is George. He lived in the Zoo. He was a good little monkey and always very curious. He wanted to find out what was going on outside the Zoo. One day, when the keeper was not paying attention, George got hold of the key for the cage. When the keeper discovered what had happened, it was too late--George was gone!

I'm curious how much time has passed (for George) in between books. Has he been in the Zoo long before he makes his escape? (That's something I never thought of as a child!) This second book chronicles George's adventures in the city. Curious George does several "jobs" throughout the book including spending time as a dishwasher in an Italian restaurant, a window washer, a painter (though this one leads him to trouble), and an actor. Poor George also breaks his leg and gets sick from smelling ether. He does reunite with the man in the yellow hat towards the end of the book... 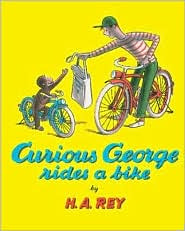 My thoughts on Curious George Rides a Bike (1952)

This is George. He lived with his friend, the man with the yellow hat. He was a good little monkey and always very curious. This morning George was curious the moment he woke up because he knew it was a special day...

What makes that day so special? It's the third anniversary of when George and the man in the yellow hat met. George is given a bike and the promise of a show--an animal show. But first George must have his own adventures. Including "helping" someone out on their paper route. But by the end of the day George ends up being in the show. But that reward didn't come easily. George has to get into and out of several messes first... 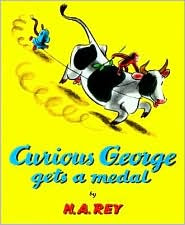 My thoughts on Curious George Gets a Medal (1957)

This is George. He lived with his friend, the man with the yellow hat. He was a good little monkey -- and always very curious. George was alone this morning, looking at a picture book, when the doorbell rang. It was the mailman. "Here is a letter for you," he said. "Put it on your friend's desk. He'll read it to you when he comes home." George was curious. It was not often that somebody wrote him.

Most of George's messes are the result of him being left on his own. If the man in the yellow hat really wanted George to behave, to be a good little monkey, then perhaps he'd spend more time with him...or hire a monkey-sitter. Maybe the man in the yellow hat gets satisfaction out of scolding George and forgiving him?! What messes does George get into in Curious George Gets a Medal? Well, he makes a mess of the rug--a watery sudsy mess--and breaks a museum exhibit--a dinosaur. But all is well in the end because there is a professor that wants George to be the first space monkey. He doesn't really go into space--into orbit--he parachutes out of a rocket. But still the public seems thrilled with George's cleverness. 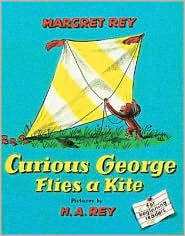 My thoughts on Curious George Flies a Kite (1958)

This is George.
He lives in the house of the man with the yellow hat.
George is a little monkey, and all monkeys are curious.
But no monkey is as curious as George.
That is why his name is Curious George.

I do like Curious George. But this is a very long adventure! In short, Curious George plays with bunnies, goes fishing, flies a kite, and gets a new pet. Of course, he gets into trouble--letting the bunnies out of their home, almost drowning, being flown away by the wind which leads to a dramatic helicopter rescue. Is every day like this for George?! Perhaps he should be Fearless George?! 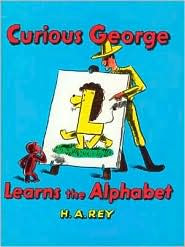 My thoughts on Curious George learns the Alphabet (1963)

This is George. He lived with his friend, the man with the yellow hat. He was a good little monkey, but he was always curious.
This morning George was looking at some of his friend's books. They were full of little black marks and dots and lines, and George was curious: what could one do with them?

This book is so boring. I'm glad that George wants to learn his letters, wants to learn to read. But this one is not that thrilling to read. It is slightly redeemed by George changing the man in the yellow hat's order for doughnuts. Instead of "one" George writes "ten". So that added some adventure. 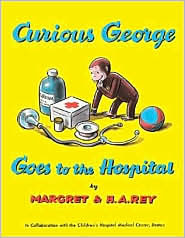 My thoughts on Curious George Goes to the Hospital (1966)

This is George. He lived with his friend, the man with the yellow hat. He was a good little monkey, but he was always curious. Today George was curious about the big box on the man's desk. What could be in it? George could not resist. He simply HAD to open it.

This isn't George's first trip to the hospital. He's had a broken leg--from an on-the-job mishap. And we're not exactly told if this is his second trip to the hospital. The monkey has been curious for years now, so perhaps he's a regular?! In this case, George is in the hospital because of a poor decision. He thought it would be a good idea to eat a puzzle piece. It wasn't. (The puzzle they're piecing together--is a picture of George and the man in the yellow hat.) But George does make some new friends--children who are in the hospital. And he is quite an entertaining monkey. And this is when he isn't feeling his best. The book concludes with George being released from the hospital, and they've sent along the puzzle piece--that they've retrieved from George--so they are able to finish the puzzle after all. I think that is strange. I don't know that I'd want the puzzle piece back. How about you?

Do you have a favorite Curious George adventure? Which of these have you read?

© Becky Laney of Young Readers
Posted by Becky at 9:32 AM