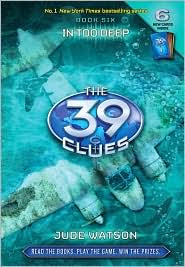 The sound of rushing water filled Amy Cahill's ears. If she kept her eyes closed, she could imagine she was standing under a beautiful tropical waterfall. Unfortunately, she was hiding in an airport bathroom.

The first five in the series are: The Maze of Bones, One False Note, The Sword Thief, Beyond the Grave, and The Black Circle.

The mystery continues to unfold as this brother-sister team (Amy and Dan) search the world for the remaining clues. In Too Deep brings us to Australia. We're introduced to several new characters--Isabel Kabra and Uncle Shep--and mysteries--how is Amelia Earhart connected to their clues?

But the search for clues isn't all that is occupying their minds. No, Amy is starting to have flashbacks, have memories, of the fire that killed her parents. And she's not sharing these with her brother, Dan. Can Amy's memory help them know who to trust now?

In Too Deep isn't my favorite of the series. But. I'm still happy to continue on with the series.

© Becky Laney of Young Readers
Posted by Becky at 10:00 AM