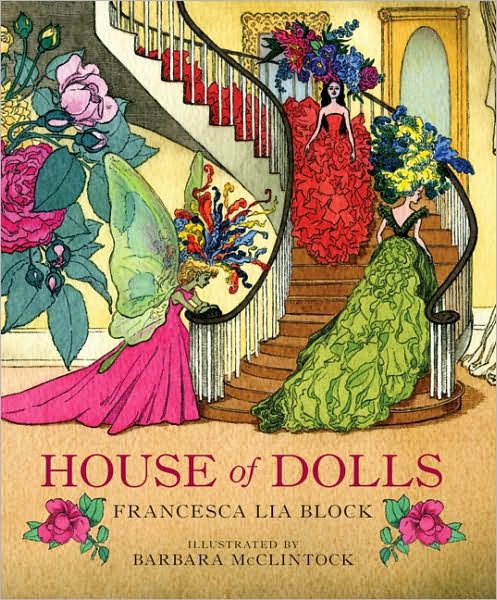 Wildflower, Rockstar, and Miss Selene lived in a house from another time, a white house with a red roof and red shutters and a red front door. In the garden was a real bonsai tree and a reflecting pool made from a pocket mirror tucked into a lawn of real moss. The floors were tiled with black-and-white parquet or softly carpeted, and the walls were covered with floral paper, foil mirrors, and paintings in gold doily frames. Above the dining room table was a silver chandelier fixed with birthday candles. Silk and lace curtains hung at every window.

Sometimes presentation matters. House of Dolls by Francesca Lia Block is a lovely example. It is beautiful inside-and-out. It is a small little book, but great attention has been paid to detail.

Wildflower, Rockstar, and Miss Selene are dolls now owned by Madison Blackberry, a very unhappy, quite lonely little girl. These dolls don't get played with very often--but the dolls don't mind. These are older dolls, and they enjoy keeping their own company. (And Madison's grandmother hasn't forgotten them completely--these dolls still get the occasional treat of a new dress.) Two of the dolls have boyfriends.

Wildflower was a celluloid doll with long black braids of real hair, pale skin, and big brown eyes with painted-on eyelashes. Guy was a dark-skinned plastic doll in army fatigues. It did not matter that they looked nothing alike.
The first time Madison Blackberry lay them down next to each other in the white lace canopy bed and their arms brushed, Wildflower and Guy knew they never wanted to be separated. Because Wildflower had lived so long and seen so much of the world, she would have been content just to sit beside Guy for the rest of her existence. (7)

Rockstar also has a boyfriend. But her boyfriend isn't a boy at all.

B. Friend was a devastatingly handsome stuffed bear with button eyes, an embroidered nose, and jointed arms and legs. He was a studious fellow with round wire-rimmed glasses with lenses made of clear dried nail polish. B. Friend wore a red crochet beret and a red flannel vest and britches. (9)

Miss Selene is a fairy doll. Since she doesn't have a soul mate, she spends her time trying on dress after dress. That is when she's not feeling sad about something she can't quite remember.

Why is Madison so unhappy? What will she do in frustration, in anger, in boredom? Well, you'll just have to read and see for yourself...

House of Dolls is about dolls. But it is about more than dolls. It is about a very real little girl struggling with some darker emotions. It is about a little girl very much in need of love and affection. It is an emotional story about a family learning just how much they need one another.


© Becky Laney of Young Readers
Posted by Becky at 3:12 PM